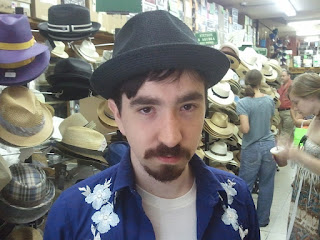 Saturday, oddly enough, was pretty subdued. Maybe the staying up late drinking had worn us out. When I got up late (especially for me) that morning, Alex appeared to be in the midst of a near-death experience and obviously wasn't ready to charge into the day. I went in search of breakfast and the nice lady at Reception recommended Mother's, which was only a few blocks away. I believe it was her responsibility to tell me ahead of time that the recommendation came with an hour+ wait out in the sun--it's a very popular place.

So I ended up where I started, crossing St. Charles from our hotel to the Hilton, which has a terrific brasserie on the ground floor, Lüke. Only drawback? Insane portions. 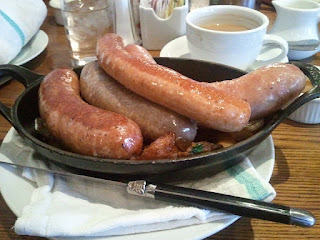 That's the Plat Lyonnais, which I believe should have come with a warning "delicious potatoes buried under four huge sausages." My waiter told me I wasn't required to finish, although he had seen a few people manage it. Everything, including the presspots of coffee, was fantastic. After I'd finished as much as I could and the waiter took away the evidence of my failure, I got a text message from Alex wondering where I was and reporting that he was raring to go. Or, anyway, ready to eat. He ended up with the Croque-Madame et Frites. 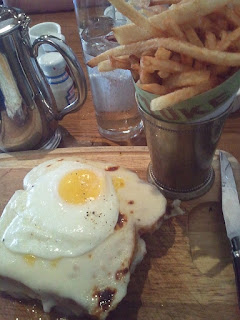 A few days earlier, I'd commented to Alex that I thought he'd look great in a pork pie hat, and he said he'd been thinking the same. We spoke to several people about hats, because New Orleans seemed like a good place to look. Everyone said the same thing: go to Meyer the Hatter. Period. Meyer the Hatter has been in the same location since 1894, providing all manner of hats to musicians, movie stars and hipsters for more than a century. It's also about two blocks from our hotel, not far from Canal Street. The jam packed store floor is topped by two more stories of hats in storage. More colors, more sizes, more styles... 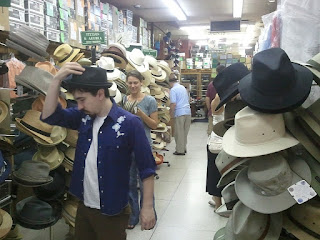 Alex was fitted by a tiny French lady (one of the staff told us she'd been there since the French Revolution) who peered up at him and announced "7 1/2 long", pulled out a hat and plunked it on him. Perfect fit. 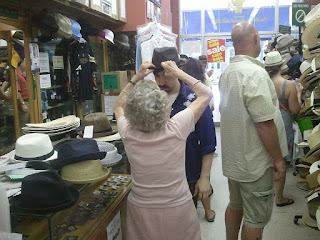 I have no idea what we did after that. Walk around? Eventually we decided on an early dinner and landed at one of Ryan's many recommendations: Coop's Place. Walked in, grabbed two bar stools, ordered Sazeracs and dinner and watched as people began standing around outside, out of the rain. It wasn't until we left that I realized that was the line to get in, which hadn't existed when we arrived. Timing is everything. 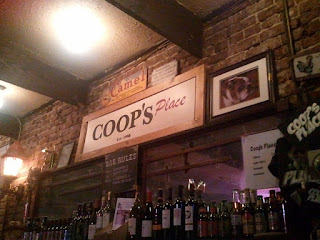 Coop's Place is an unassuming bar with no attempt at slickness, on the walls or behind the bar. The kitchen is out back, outside, where they also smoke the most incredible tasso I've ever tasted -- well, that's not adequate, because I haven't had that much tasso. Let's say some of the most incredible smoked meat I've ever tasted. The tasso was in my jambalaya supreme (rabbit, sausage, shrimp and tasso) which was brilliant. Very poor photo follows. 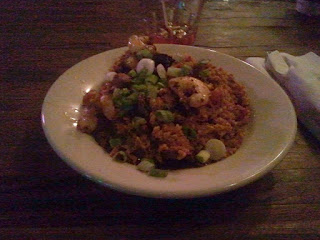 We were beat. Another trip to Cure was considered but seemed overwhelming. Back to the hotel it was.

On Thursday, waiting for Jenaya to pick us up, Alex and I had briefly sat in the hotel bar, which specializes in champagne cocktails and is a very pleasant space. The bartender spoke to us and then left to serve her tables, and we decided to go outside instead. She ran over just as we reached the escalator to ask where we were going, and we promised we'd come back later. So we did, two days later. Courtney was born and raised in New Orleans and pretty much fulfilled every story I'd ever heard about the warm and friendly locals. We pretty much had the place to ourselves, and talked with her about the city, cooking, music, and what we'd experienced over the last few days. Even though she built us no original and complicated cocktails, Courtney goes on the list of best bartenders ever.

Sunday it rained, New Orleans style. During a break in the downpour, Alex and I headed to the French Quarter for a muffaletta, except Napoleon House is closed on Sundays. A quick check with Ryan steered us down the block to Johnny's Po-boys, a relative newcomer that's only been open since 1950. Johnny's was packed. 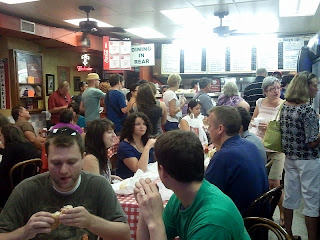 After awhile the crowd thinned out a little, because people left and it was raining so hard that no one was swimming through it to come in for a po-boy. As ordered by Ryan, we had a roast beef po-boy, dressed. We split it. 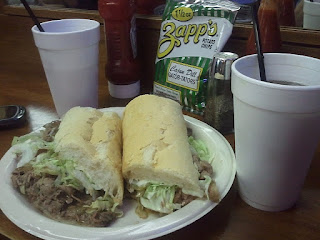 That was pretty much it. Walking in the rain was not fun and we were drenched. We drank hot tea in the hotel bar for awhile and eventually headed out for our evening flight back through Houston (bbq in the airport!) and home. 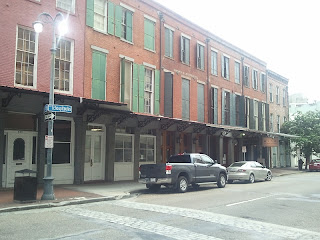 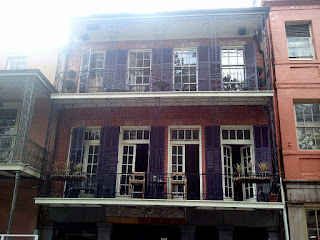 I believe I promised deep thoughts, but I've misplaced them. This I will say: New Orleans is not like any place else. It's not like any other American city (although outside the city proper a lot of it looks like the worst of Southern California). I really had no idea what people were getting at when they told me of their affection for the city, or why people would put up with storms and heat and even move back after huge sections of New Orleans had been pounded and flooded and dismissed by the rest of the country.

I don't believe anyone can have even a faint grasp of how special New Orleans is without actually being there. Me? I don't know anything about NOLA at all, except that there is so much there to experience and immerse myself in. I'm definitely going back.

Posted by jefffrane at 9:18 AM

Thank You for allowing us to live your vacation through narrative and photograph.
Delightful - rain and all. Certainly got the ambiance of NOLA and environs.
Very appreciative of your sharing nature!