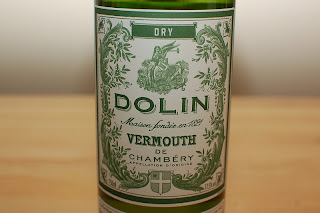 My friend Ryan and I visited The Secret Society Lounge shortly after it opened, an intimate Victorian-era bar specializing in well-crafted classic cocktails. I thought they were shaking too many that should have been stirred, but the effort was appreciated, and the offerings really were classic.

The downside of "intimate" of course is that it's difficult to avoid listening to neighbors' conversations. A new group plopped down next to our table and one of the patrons, barely glancing at the cocktail menu, announced, "I know what I want! I want a dirty martini!". My natural response was to throw her out of the bar, obviously, but I've become tolerant in my old age and realized it wasn't her fault to get it so wrong.

An order for a dirty martini is a cry for help.

It takes some time and effort to develop a taste for booze, which is why young people tend to cover it up with all sorts of nasty sweet concoctions like Jack & Coke. When someone is persuaded to try actual spirits, there's a natural tendency to choose something odorless and flavorless -- vodka. Even someone as smart and funny as Alan Cumming comes to believe that a "martini" is simply an icy glass of nearly-frozen vodka. Shaken, because that's how to get the drink really cold and notice: a sketch of vermouth to rinse the mixing glass and then poured out. The call for a dirty martini is a plea to have something to taste, even if it's only olive brine.

My father's generation is probably to blame for this, or perhaps we can pin it on Winston Churchill, who championed a big nearly-frozen glass of gin, with the bartender glancing at a bottle of dry vermouth before serving. My dad subscribed to a similar view and would make reference to waving an open vermouth bottle near the martini pitcher. Considering the awful slop he passed off as gin, this only makes sense because the vermouth he'd have on hand was even worse. Bought from the bottom shelf and left unrefrigerated (probably for years), his vermouth was something to avoid.

Fear, apparently, is a factor. "Almost 75 percent of my vodka martini drinkers are very, very afraid of vermouth," says Brooke Arthur, bar manager at Range. While many vodka martini fans are seeking a cocktail as flavorless as possible, Arthur says, drinkers enter the world of the contemporary bar with almost no exposure to vermouth.

"They don't even know what it tastes like, but a friend who gave them their first dirty martini didn't use it, so they don't want it in there," Arthur says.

Native to northwest Italy and southern France, vermouth - a wine that has been aromatized with herbs and other botanicals and lightly fortified with unaged brandy - is widely popular in parts of Europe, where it is usually served as an aperitif. But from the approach taken by most American bartenders - who typically dispense vermouth with atomizers, eyedroppers or simply a delicate hand when mixing martinis - vermouth could be considered some sort of bibulous antimatter.

There is, truthfully, a great deal of sub-par vermouth on the market; anyone who tasted the stuff straight would be justified in thinking of it as crap. Dry vermouth is made from a wine base, seasoned with botanicals. In civilized countries, it's treated as an aperitif, consumed before dinner with ice and perhaps an orange peel. That's good vermouth, though, starting with a base of decent wine, not from some ghastly "wine" you'd never allow on your table.

Vermouth was first produced commercially in the late 18th Century, but had been concocted at home for centuries. Paul Clarke again:


Typically made from neutral-character dry white wines that have been flavored with herbs, roots and barks - typically including cardamom, cinnamon, marjoram and chamomile - and then fortified with a neutral grape spirit, vermouth is classically made - and named - for another botanical: wormwood (the plant's name in Old High German is Wermud). 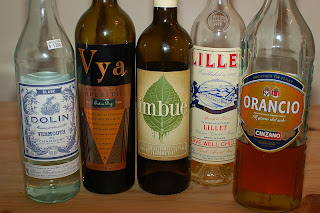 Fortunately, really good vermouth (and aperitifs) are becoming more available, and truly distinctive vermouths are being produced right here in the US, although on a limited scale. The Quady Winery has been producing a dry and a sweet vermouth in California since 1999. Their dry vermouth is very dry indeed. On a base of Orange Muscat wine, they've added a unique blend of botanicals including lavender and various mints. (Also from California is Sutton Cellars dry vermouth, with great word of mouth--not going to taste it until some kind soul from California brings me a bottle. They are also developed a rosé vermouth, which sounds like heaven.)

Here in Oregon, a small company produces Imbue Bittersweet Vermouth, which is bitter indeed. Tasting it on its own, I found the vermouth shocking and demanding, but as a martini ingredient it is exceptionally good: pretty much the polar opposite of a "vodka martini".

The European vermouths included in the photo range from the gentle Dolin "Blanc" on the left (the also make excellent dry and sweet vermouths), Lillet Blanc (technically not vermouth, but filling a similar role in cocktails and on the table) and the very rare Cinzano Orancio, which is too sweet to be a "dry" vermouth, and too delicate to replace sweet vermouth. It plays well with oranges, oddly enough.

Find a bar that stocks good vermouth and ask to try a few on the rocks. A twist of lemon and a spritz of soda help to create a refreshing pre-dinner drink. And then try some serious cocktails. Make a real martini!

Martini the Right Way (or one of the right ways)

2 oz. gin (I like Tanqueray because it's good and it's cheap; there are plenty of other choices, such as Aviation; it's important that it be a robust gin
1 oz. Vya dry vermouth
2 dashes orange bitters

Stir vigorously with plenty of ice until well-chilled; pour into an frosty cocktail glass and garnish with lemon peel

UPDATE: More on dry vermouth at this blog.
Posted by jefffrane at 4:19 PM 3 comments: