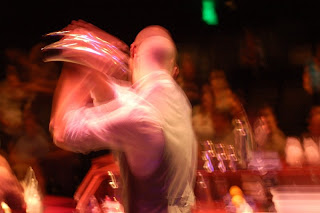 Today marked the second annual Mixology Competition as part of the fourth annual Great American Distillers Festival here in Portland. I was working as the timer in the competition -- each bartender had seven minutes to make the required five cocktails for the judges. The recipes had to include at least one of the alcoholic beverages featured at the festival, and included a lot of homemade ingredients like syrups, bitters and some very odd approaches to the simple (ha!) ice cube. Lighting conditions were awful, particularly since I didn't want to disturb the contestants with a flash. But this one I actually like.

I only managed one clear picture of a competitor, Alyson Dykes from the Teardrop Lounge. That's what I get for being a nice guy and not using a flash. 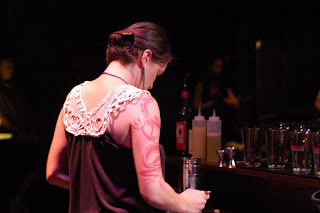