Chicago with the Snobs, Day 2 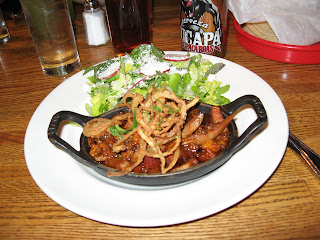 Day 2, pretty much all about the food. And beer. But mostly food, at least at first.

This started with lunch at Rick Bayless' Frontera Grill, reservations for eight at the 11:30 opening--prompting Brit Peter to cry, "Who eats lunch at 11:30?" as though we were mad. The photo is of my "light entree", Cazuela de Pato: "slow-cooked Gunthorp duck carnitas with ancho chile, lentils, slab bacon and grilled pineapple. Crispy onions." Others at the table had barbacoa goat enchiladas or the daily special of lamb slow-cooked in some incredible sauce, or . . . these being served after the small plates and appetizers, primary among them the "Trio, Trio, Trio: a sampling of Ceviche Fronterizo, Ceviche Yucateco and Coctel de Atun Tropical. 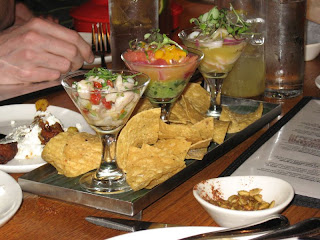 Well-stuffed with incredible food, we pottered off to the El, and a brisk walk (to those not plagued with battered knees) to the Map Room, one of Chicago's best multi-tap taverns. I had remembered the Map Room as dark, smoky and packed but yesterday reflected the non-smoking rules, with lots of light and air and a truly fine selection of beers from around the Midwest. (More photos here.) Eventually, a somewhat rash decision was made to move on for food and a visit to Hopleaf. Certain members of the party elected to skip the food and arrange seating at Hopleaf for the other six. We will speak of this treachery no more.

The half dozen heroes cabbed over to Mr. Beef, which turned out to be closed (apparently not uncommon). Fortunately, Portillo's was close by and we were able to fall on Italian beef sandwiches (hot peppers and crusty rolls) and real Chicago hot dogs.

Another cab ride over to Hopleaf, which was packed, crowded, stuffy and offered primarily Belgian beers we could find anywhere civilized. No place to sit or even stand comfortably and very little I found interesting on offer. Ryan, Steve and I peeled off for what turned out to be a longish bus and train ride to the Clark Street Ale House, where we lucked into a table and a much more appealing list of regional beers. The pub was crowded and loud, but vastly more comfortable. Other Snobs eventually wandered in later, more beer and fun ensued and we got ready to push off to bed. Amazingly enough, most of the group elected to head out to the Billy Goat Tavern for cheezborgers (cue Belushi skit). I tottered back to the hotel on my own, spent entirely too much time waiting on the El platform and just barely made it to my room without embarrassing myself.

Time now to clean up and get ready to stand in line for lunch at Hot Doug's. I believe there is a pizza in my future sometime after that.
Posted by jefffrane at 6:02 AM 6 comments:

Chicago with the Snobs, Day 1 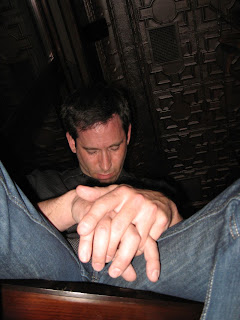 I am blessed with a group of excellent friends, loosely known as The Snobs who, perhaps unfortunately, are scattered across the US and beyond. For very special occasions we've been able to gather for a few days of in-person visiting, always involving beer. Two of the Snobs were born in 1970, the year of my majority, and we decided it was worth celebrating. Chicago has several advantages, not the least of which is centrality, so there are nine of us here from the West Coast, the East Coast and the UK. The only goals are consumption and badinage, both of which we're quite good at.

Five of us managed to arrive at O'Hare virtually at once, took the El into downtown and our various hotels, then began acquiring more Snobs as we moved from Rock Bottom (loud, crowded and quite decent beer) to Piece, serving non-Chicago pizza and house beers (OK pizza, eh beer). Piece was unbelievably crowded but by great fortune we were able to ooze into a table as acquaintances finished their meal and oozed out--one of whom was actually the Rock Bottom brewer responsible for my excellent pils. From there, we El-d a few stops further north to Revolution, a new brewpub serving exceptionally good beers. At this point, Lew Bryson was to have made a surprise entrance (him being in town for Whiskeyfest), which he screwed up by gabbing about on Facebook. Everyone was pleased, though, to have an Auxiliary Snob (with a very special flask) who is as much fun as Lew. There was some initial concern that Lew's laugh would get us 86'd, but the wait staff at Revolution was tolerant and the place was noisy enough to absorb the volume.

Chicago at night is so different from laid-back Portland that it's difficult to credit. Even well after midnight, the streets were bustling, the bars packed and the El trains well-filled with people. Lots of young people out and about, dealing with the chilly air in everything from skimpy skirts to parkas. A lot of bicycles in what appears to be a very un-bikefriendly town. And Chicago is a lot older than Portland, which is most obvious to me in the tunnels and platforms of the El, amazing constructions of iron and wood with furnishings dating back to the 19th Century. All, I might add, still functioning with surprising efficiency. Two in the morning? No problem, the train back to the Loop will be here in six minutes.

The best part? We just got here and don't leave for days.
Posted by jefffrane at 7:09 AM 1 comment: