My appliances are dying

(Update below) I have a National rice cooker that I bought some time in 1980. Before I bought it, I was terrified of cooking rice at the same time I was living in Berkeley and deeply invested in learning to cook Asian (mostly Chinese at the time) cuisines. Living in Berkeley, in fact, it was impossible to avoid Asian food even if I'd wanted to. Dining out was the primary social activity among everyone I knew, and delicious and inexpensive Chinese, Thai, Korean and Japanese food was omnipresent. Inspired by what I was eating, I was determined to learn how to prepare it at home and the groceries in Oakland's Chinatown were a short trip away. But rice? Rice sounded incredibly arbitrary and difficult and while I was chopping and prepping dishes for the wok the last thing I could worry about was whether the water had boiled away in the rice, or the heat was too high or too low . . .

Of course, actual Asians had solved this problem years before and invented the electric rice cooker. Throw rice into the bowl, rinse, rinse, rinse, add cold water to the first knuckle, return bowl to cooker, add lid, push button and go back to whatever you were doing. The bimetal switch would detect when all the water had boiled off because the temperature would start to rise, and it would switch off the cooker with an audible snap. Wait 15 minutes for the rice to steam and voila. Or whatever the Cantonese equivalent of voila might be.

Since 1980, I've cooked literally thousands of batches of rice with this thing. I've replaced the power cord and the knob for the lid. The plastic lever for the switch is cracked and the whole thing is remarkably grungy. But it's still cooking rice. The problem is, it's no longer simple to clean. The rice sticks and leftovers don't want to come out. Cleaning the bowl has become a real chore. I just hit the "1-click" at Amazon for a new Panasonic rice cooker which looks to be just as simple and primitive as my National. No "warmer", no vegetable settings (Yoicks! You can spend a lot of money on a "rice cooker"), and it cost less than $25. I've got my fingers crossed that it's pretty much the same unit with a shiny coat (and a nonstick bowl). The old rice cooker is going in the back of the cupboard; there's no way I could actually throw it away.

And the coffee maker died. Well, it didn't exactly die, because it can still brew coffee, but there has been a disconcerting amount of hot water on the counter afterward. Turns out it's leaking out around the power cord, which is more than a little unnerving. A Gevalia brewer, it isn't nearly as old as the rice cooker, but it's been pretty reliable and, best and critical feature, it brews into a thermos carafe. No hot plate burned coffee for me. The new one just arrived: a fancy Japanese unit with a stainless carafe and a timer! I kind of like it. And I didn't have to suffer through a month's supply of Gevalia coffee to get it, which is a bonus.

Update: Both the coffee maker and the rice cooker have arrived and been put to good use. The lid on carafe apparently has to be set in the correct position, or the hot coffee has nowhere to go except down onto the counter, but otherwise the luxury of having it start brewing while I drag myself out of bed is worth the cost. The rice cooker seemed tiny when I first opened the box but it's actually perfect for the one-person batches of rice I need and the glass lid means I can watch the rice cook! Friday nights will never be boring again.
Posted by jefffrane at 5:23 PM No comments: 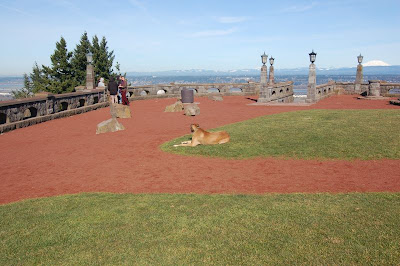 Since it's 50 degrees in the middle of February, and the sun is shining out of a clear blue sky, I thought it was a good idea to get outdoors for a bit. So, after living in Portland for 24 years, I finally got around to actually visiting Rocky Butte State Park, which turned out to be nothing at all like I expected. Well, it was high up and provided a panoramic view of the Columbia River, Mt Hood, and Mt St Helens (and IKEA and a lot of industrial land and two freeways), but I anticipated something wild and more natural. Instead, I drove up a long winding road, through a tunnel, alongside a number of stilt houses eagerly awaiting a good quake, and some of the biggest and ugliest McMansions I've seen in town.

Then, at the very top, I found the Joseph Wood Hill "Park" which was originally the site for a military academy built in the early 20th century. What it looks like, really, is an old stone fortress. Guarded today by the biggest Great Dane I've ever seen. The forest-y portion of the park is downhill and to the east and for all I know there are trails through it. In general, I wasn't overwhelmed.
Posted by jefffrane at 1:32 PM No comments: