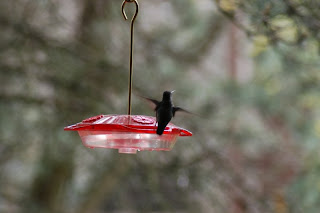 My apartment has a nice balcony and I knew there were plenty of hummingbirds around; I even heard them in the winter. That inspired me to buy a hummingbird feeder and hang it under the overhang on the balcony. The first week was discouraging, as I waited and waited for one of them to show up. It was really exciting the first time I spotted a bird perched out there, sucking up the nectar and now, although it has become commonplace, it's still a treat to watch them.

Taking photos is another story, but I finally got a few that aren't terrible. The most difficult trick is catching one leaving the perch because, without any notice, they just bullet off into the sky. I had given up and was just getting ready to put the tripod away, when I shot a last series and lucked into the shot above.

I still don't know if I'm being visited by a number of different hummers that share a remarkable resemblance, or whether I've got one remarkably piggy little bird that stops by several times per hour.
Posted by jefffrane at 2:16 PM 3 comments: