Drinking in the UK, Part One 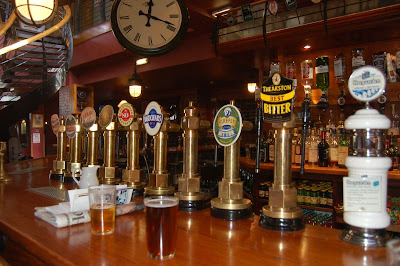 What eventually became The Greatest Vacation Ever started with a wedding announcement. My friend David B., who had been professoring in Holland for several years and lately in Plymouth, England, determined that he would marry an Englishwoman and that he intended doing so in England, located rather inconveniently far from Oregon. This would also be occasion for a gathering of, not eagles so much as beer geeks, scattered across the US and as far east as Germany. I decided that it would be foolish to travel all that way and not visit something beyond Plymouth and that I could stretch the whole trip to a fortnight (already practicing British-isms).

After considering altbiers in Dusseldorf and serious pubcrawling through Belgium, I chose the undeniable pull from Scotland, eventually focusing on Islay, with its concentration of great distilleries. The most logical jumping-off point for Islay is Glasgow, and my friend Peter's offer to travel up from Manchester for a few days in town was the final selling point. Having grown up (to some extent--opinions on the subject will vary) nearby, Peter is practically a native guide, and proved to have an unerring nose for the best pubs and the best ales. He has been heavily (heh) involved with the Campaign for Real Ale (CAMRA) for years; he knows his stuff.

Over the weeks and months before my trip, David and Peter schooled me in the arcana of UK pubs and their surroundings. I would arrive prepared for the correct approach to ordering (up at the bar, none of this lurking about at the table) and the correct approach to paying (no tips, and count your change thoroughly). I learned about black cabs, which ATMs to avoid (those in pubs) and the difference between proper (Northern) and improper (Southern) dispense. No one mentioned, however, that the Scots print their own pound notes and, worse, issue them from three separate Scottish banks. You're sure this is real money? This one's got an engraving of a distillery!

Glasgow turned out to be a lovely city, one that has scraped off most of the industrial soot to reveal huge and beautiful Victorian architecture. My bed & breakfast was on Belhaven Terrace, a neighborhood of winding streets and gorgeous old flats, with high ceilings, huge windows and marvelous clay chimney pots. Arriving there completely knackered after an endless flight through San Francisco and Heathrow (bah), I summoned the strength to make the 10-minute hike down to Tennents, which fulfilled all my fantasies of British pubs. A big u-shaped bar surrounded by lots of floor space and "snugs" all around, serving 8-10 beautifully cellared and conditioned real ales--and a surprise to me, a chalkboard listing each of the ales on tap, along with their alcohol content and price (which varied according to the former).

My first real ale was a Deuchar's (Dooker's Jew-chers) IPA, followed in short order by two pints of Caledonian 80' and dinner: shepherd's pie, served with peas and what I was to learn were the ubiquitous British chips. Meat & gravy covered with mashed potatoes and served with . . . chips. (Chips are inescapable in the UK and most, quite honestly, are not overwhelming goodness. There is, presumably, an enormous surplus of them and pubs and restaurants everywhere are required to offload them whenever possible. The wise traveler learns to tuck them under napkins or onto someone else's plate.) The beer was superb. Over the next few days I developed a real taste for Scottish beer, especially the maltier varieties and continued to marvel at how much flavor could be tucked into beers of what I would consider low-alcohol content, often under 4% a.b.v.

On my walk to the pub and over dinner, I got my first real tastes of something else: Glaswegian, the nearly-incomprehensible language of the locals. This, although a cartoon, is a damn good representation of what I mean. As David had warned me when I rang him on my mobile (UK speak for "cell phone"), "They don't come with subtitles." The friendly young couple that sat next to me during dinner did their best, but the fellow may as well have been speaking Urdu. The young woman made the effort to speak more slowly and was willing to repeat herself so that I could get the gist of it. I'm pretty sure I could live in Glasgow for a decade and never really get it.

Next: the intrepid guide takes me in hand.
Posted by jefffrane at 4:46 PM 4 comments: 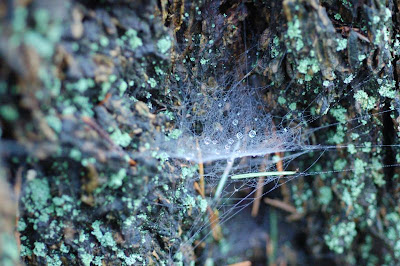 Experimenting with a macro lens. Depth of field is miniscule and without enough light (and a dog tugging on the leash) it's difficult to tell what's in focus and what isn't. And difficult to know in advance what the camera is going to see that I didn't, like the drops of water in this image. More research is definitely required.
Posted by jefffrane at 10:04 AM 1 comment: