Random Photos of the Day

Those of us who have lived in Portland a long time tend to have a poor opinion of the manner in which an old industrial neighborhood has turned into the environ of Yuppies with way too much money. Most of the old buildings in the Pearl District have been torn down and replaced with hideously-expensive condos, which from an architectural standpoint are admittedly very attractive. All the naked display of conspicuous wealth and consumption does creep me out, personally, but no more so than the equally conspicuous hipster persona of the new Mississippi neighborhood.

This particular building is one I always admired while it was still a commercial building and I have to admit, if I had a bazillion dollars, I might think seriously about buying a unit in the conversion. There is a garden on the roof, but it's not possible to tell from my lowly position on the street whether it's a communal garden or whether one of the residents has even more money than the rest. I confess to a sick feeling of envy.

A similar building is just across the street.
Posted by jefffrane at 4:49 PM No comments:

A Dram in Memory of Michael Jackson 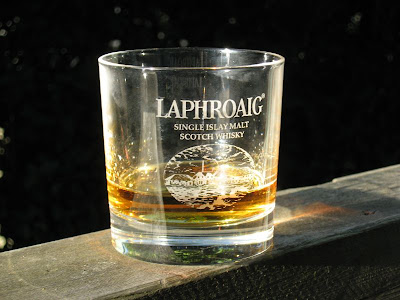 Michael Jackson died a few days ago, apparently as a result of his Parkinson's Disease. Jackson was one of a rare group of people whose advocacy had a profound impact on the manner in which people came to view beer, for he was one of the first writers to take beer seriously, with the same gravitas given to wine. He helped to define the vast array of beers and breweries, and to awaken drinkers not only to the rising craft movement in the US, but to the obscure, the lost, and the disappearing beerstyles of Europe.

Jackson was likewise a booster and an educator on the subject of whisky, especially whisky from Scotland. I am sure he would have loved this dram of Laphroaig, 10 year old original cask strength, and I raise it in his honor and memory. The man lived a rich and bountiful life, with a planet full of friends to remember him, but he still left too early.
Posted by jefffrane at 4:18 PM No comments: