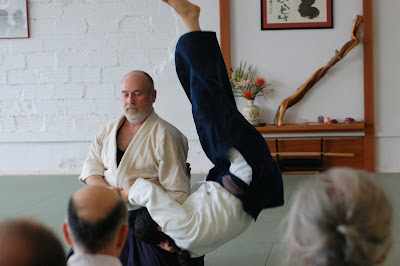 We hosted an Aikido seminar this weekend at my dojo (pictures to come). K. Chiba Shihan was scheduled to come to Oregon for what may well have been the last time since he's retiring after 50 years of Aikido training. Unfortunately, he was very ill and couldn't travel, but we held the seminar anyway, with a number of excellent senior instructors in attendance. This is Fleshler Sensei, who has been my teacher since he came to Portland in the late 80s. Since I have a nasty cold, I had the opportunity to take photos rather than have my body thrown through the air. Some would say that was a good trade-off, but I chafed at the bit. Still, I did shoot nearly 1,000 pictures during the seminar and one or two of them are pretty good. At some point, I'll post more but I wanted to acknowledge my debt to my teacher as a gesture of thanks.
Posted by jefffrane at 8:07 PM 2 comments:

Last night I served the lamb tagine that was the target for the preserved lemons. It was a fairly complex (and expensive) dish, done with lots of spices, crookneck squash, Kalamata olives and 16 wedges of the preserved lemon and four pounds of lamb shoulder in big pieces. We had a great dojo potluck the Saturday night of a big Aikido seminar.

The tagine was a hit. In fact, I was lucky to get any myself since it was mostly gone by the time I got into line. Several people asked me later if I'd tasted the lamb dish and then wanted to know how it was done. I love cooking for people when they appreciate what I've done!

Somehow, after spending the entire day photographing the Aikido seminar, I neglected to take a picture of the tagine. Damn.
Posted by jefffrane at 8:06 AM 1 comment: