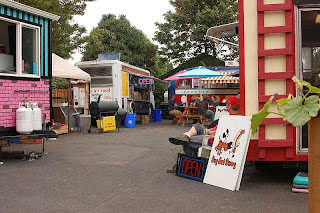 Two months without a blog entry? Have I no sense of shame?

Last week I finally started paying attention to the eruption of food carts here in Portland. One article I read reported that we had more than 200 now, scattered around town in "pods", which appear to share rent in an empty lot, along with utilities and dining areas. The familiar array on the Transit Mall downtown seems to be primarily Indian, Thai, Thai, Indian and Thai. Plus some Indian food. Elsewhere in town the diversity is much greater, and new pods appear constantly, requiring websites solely to track and review them.

Alex and Becky made a timely visit to Portland last week, and we chose the very new pod on Belmont near 43rd for our first exploration. So much to choose from! Mexican, Italian, Korean/Hawaiian, sausages, fresh produce, "comfort food", Thai, Middle Eastern...

Although the Dawg of the Day was tempting, I opted for the pulled pork plate at Namu's Killer Korean BBQ, and the result was even better than expected. Shredded pork, slow-cooked with cabbage  was served along with sticky rice and a sauce (I chose creamy horseradish), and traditional Korean cucumber and spinach salads, and kimchee. Absolutely delicious. 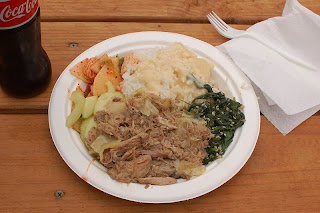 Alex and Becky chose the Eurotrash cart and came back with equally delicious options. 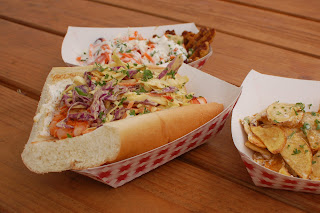 Because we were having a late lunch, we almost had the entire site to ourselves. Based on observation at other locations, I'm guessing that the place is jumping during the noon hour and in the evening (almost all of these carts are closed by 10 pm). As pleasant as it was for us, on a cool summer afternoon, I have to wonder how well the carts will do in the Winter when the table umbrellas will offer little shelter. The Hawthorne pod has a big tent for seating, but most of the pods I've seen are highly exposed. 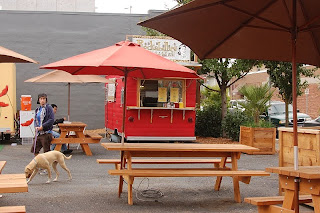 Posted by jefffrane at 4:36 PM No comments: