A bit of cooking 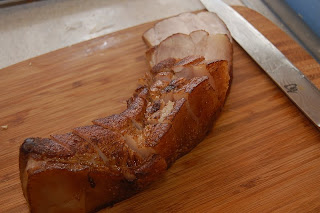 One of my favorite Szechuan dishes is Steamed Pork with Mei Gan Tsai, which I discovered accidentally in an Oakland family-style restaurant. At the time, I lived on a ridge above the restaurant, where the kitchen fans blew up to the apartment in the evening. Needless to say, decisions about what to have for dinner often involved walking around the corner for Chinese food. Having become a loyal customer, I could get good advice and make unfamiliar choices. Moving away could have been traumatic, because it's not a commonly-offered restaurant dish, but Bruce Cost's excellent book on Asian ingredients provided the recipe.

It's a simple dish, with a time-consuming preparation. The first step is to boil a nice chunk of pork belly for about 45 minutes. The meat is drained, patted dry and rubbed with dark soy, then browned in very hot oil. Tonight's meat came from Fubonn market on 82nd Avenue, which has an excellent meat department. This is a particularly nice-looking slab with plenty of meat and fat. 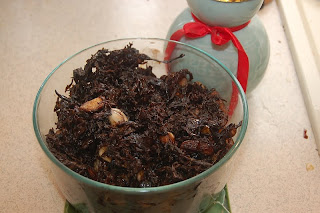 Eight cloves of garlic, about four ounces of pickled mustard greens, dark soy and a half cup of Shao Tsing rice wine is sauteed briefly. The meat is sliced and placed in a bowl, with the greens and seasoning ladled on top. The whole dish then goes into the steamer for a good 2.5  hours, during which time the hard fat of the bacon will break down into soft yumminess and add lots of pork flavor to the greens. The process is essentially the same as the breakdown of fat through slow cooking in the best barbecue. 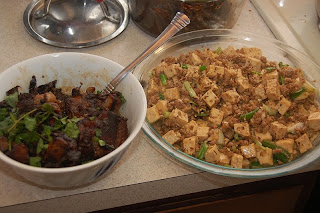 Pork on the left, Ma Po Bean Curd on the right. And, of course, there is rice.
Posted by jefffrane at 8:01 PM 5 comments:

Chicago with the Snobs, Day 5 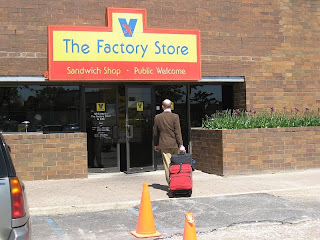 Day Five was primarily a travel day for the remaining Snobs and, naturally, the weather was gorgeous after four days of gray and damp. Most of the group had either left on Sunday or had mid-day flights out on Monday, but Peter, Ryan and I had brunch at Heaven on Seven, a Louisiana-themed restaurant in the Loop. Excellent food, and Peter's introduction to a po'boy, which he handled with grace and style. Ryan and I had a daily special, shrimp and cheese grits with gumbo on the side. Yum.

After seeing Peter off to a few pints and his flight, Ryan and I had one last Chicago task, a visit to the holy shrine of hot dogs: the Vienna Beef factory store. Located in an industrial area not far from De Paul University and its lovely neighborhood, we reached it with a short trip on the Red Line and another short bus ride west. The "store" is also a diner and the company lunchroom, with plenty of other products on sale besides the essential hot dog--all sorts of meat goodness, packages of condiments, t-shirts--the works, as it were. Even though we'd been well fed at Heaven, Ryan got a hot dog at the Source. It seemed a fitting conclusion to all the days of excess in Chicago. 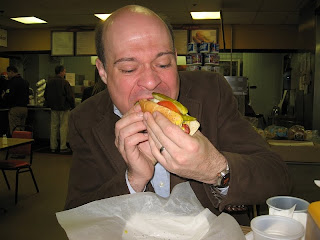 Chicago with the Snobs, Day 4 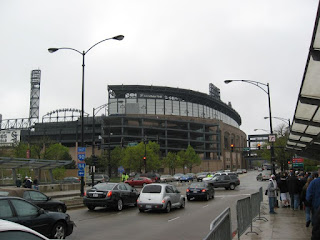 Four of the Snobs had invested in tickets to a Sunday ball game (excellent seats!) and had been viewing weather forecasts with some dread. Over a hot dog breakfast in the Loop, we watched the rain pour down, and considered options. We could abandon the idea entirely and find a warm dry nook with food and beer, or we hope for some periods of dryness and at least tour an unfamiliar ball park. For my own case, opportunities to see a Major League game come infrequently, and there was always the possibility that the visiting Mariners would avoid being swept by the White Sox. Not a strong possibility, but hope springs eternal. 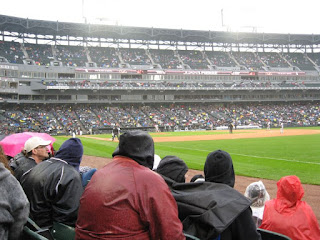 Chicago makes baseball easy, at least on the South Side, as the Red Line stops a few hundred yards from the park. We were seated four rows back, on the first base line in right field. The stadium is built so that this meant we were virtually at field level with a great view. It was wet. And cold. Tarps were down over the infield and their removal was greeted with a roar of approval. Maybe this wouldn't be so bad! And just as the game began, it rained. Not for long, though, just enough to give everyone a good soaking in preparation for blasts of really cold air. For the most part, the rain held off for nine innings but the cold and the wind never did. We stuck it out, though, along with the thousands of happy locals whose team won this game, along with the previous two games in the series. Me, not so happy with the result, but very pleased we'd taken our chances.

CTA makes baseball easy after the game as well. Portable fare machines, lots of extra customer service staff directing fans down to the trains, which were frequent and capable of carrying far more people than the light rail trains I'm used to in Portland. Red Line into town, Blue Line up north and a quick bus ride to the Map Room, where we settled in for the evening. For the baseball Snobs, all this meant no beer until 5:30 pm! Clearly, we needed to work hard to make up for the delay. Dinner was take out, delicious Cubano sandwiches from a few blocks away.

I was tucked up snug in bed before midnight. Other Snobs, however, finished up with cheezborgers at the Billy Goat. No, seriously.
Posted by jefffrane at 6:19 AM No comments:

Chicago with the Snobs, Day 3 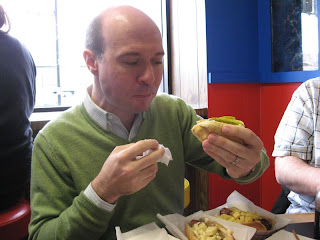 More food and less beer, more or less. Knowing that there would be a line at Hot Doug's, the plan was to arrive when they opened at 10:30 or as close to that time as possible, given the longish transit ride out to sausage paradise. Since it was The Snobs, naturally, the plan fell short at critical moments and we ended up arriving at about noon. There was a line. We stood and talked in that line for 90 minutes before reaching encased meat heaven. Thanks to the generosity of absent Snob, Charlie Gow, we indulged. Well, others did. I only had a Chicago dog, a corndog and an Uber Garlic Pork Sausage with Roasted Garlic Dijonnaise and Moody Blue Cheese. And duck fat fries. There were other sausages at the table, mostly from the specials section of the menu. 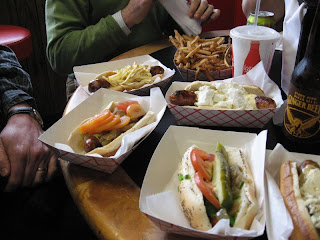 We packed our well-stuffed casings on to the bus and then the El (Chicago understands public transit as well as Chicago understands meat) and landed at Rock Bottom for many pints and many Chicago fans screaming as their hockey team won in overtime on multiple screens. (Chicago also understands sports, as one would expect of a city with two baseball teams, a hockey team and a basketball team.) Additional Snobs drifted in and then out through the afternoon. There was beer.

And then there was pizza. Five of us pushed off through the rain to Gino's East for excellent deep-dish pies, the crunchy polenta crust stuffed with cheese, meat, tomatoes and spices. Both pizzas were considerably better than in a visit seven years ago to a different Gino's, and the service was terrific. 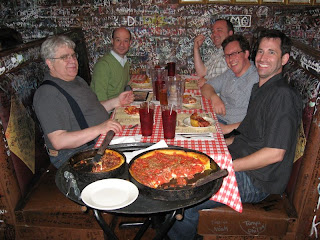 Don't these guys look happy? (From left: me, Ryan, Steve, Andy, Dave.) Most fortunately, our server offered to take the photo before we started to eat. Damage to the food was considerable and certainly not pretty. Nothing to be done after all this but push on through the rain to the Billy Goat for Old Styles. No cheezborgers, though, at least not this night. I hear rumors that cheezborgers were consumed the previous and the following nights, in the wee hours.
Posted by jefffrane at 7:17 AM 2 comments: