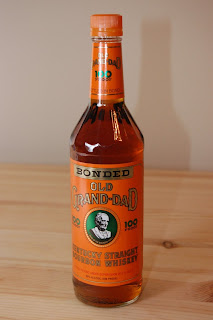 Is Old Grand-dad the most underrated bourbon in the world? It seems to me that no one takes it seriously, while heaping praise on a whole swarm of latecomers, many of them costing much more money, and delivering very little more to show for it. It isn't fashionable, it doesn't come in a beautiful bottle, and it has an old-fashioned, unfashionable name. It's been around forever (or at least since the 1880s) and reportedly hasn't changed much since. You'll probably find it on one of the lowest shelves in the liquor store, but it's definitely worth stooping over to pick up a bottle. It's the very definition of bourbon.

We're talking about Old Grand-dad 100 here, the "bonded" version. An 86 proof bottling is available and not really worth the effort. There's also a 114 proof monster that is well worth seeking out, although it's really not for the faint-hearted. The BIB version is the real gem, with a huge backbone of rye for spice coupled with a surprisingly sweet palate and a very long finish. 100 proof is a lot to drink straight and there is definitely an alcoholic burn that mellows with a bit of ice.

The high proof also makes it a natural for cocktails, although I've yet to see it mentioned as an ingredient. As the new generation of bartenders has discovered the versatility of rye in cocktails, especially in drinks like the Manhattan, they may have missed this one entirely. Rittenhouse BIB rye gets frequent mention, but the Old Grand-dad is an equally suitable choice and holds its own with robust vermouths like Antica Formula. For an all-American version of the Manhattan, I paired it with Vya's very rich and dense sweet vermouth, 2 to 1 with a couple of dashes of orange bitters and it made for a spectacular cocktail. (And as it turns out, it makes a killer whiskey sour.)

Some day, Jim Beam might pour this into a fancy bottle, double the price and sell a ton of it. I've seen that happen with other fine and unnoticed bourbons, and I'd be seriously miffed if they followed suit. In the meantime, stoop down and pick up a bottle. Tell me if I'm wrong about this exemplary bourbon.

There is a change in the White House.
Posted by jefffrane at 10:26 AM 1 comment:

Passed Out - Yur Doin It Rite 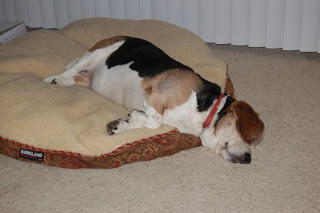 Posted by jefffrane at 2:00 PM No comments: