Better not be a white Christmas! 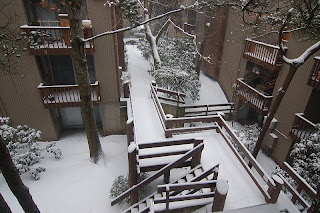 It's December 20th at roughly 4 p.m. and it has been snowing since about 8 a.m. There still isn't an enormous accumulation of snow, but for Portland it's pretty impressive and the forecast is for more and worse to come, including sleet or freezing rain. And temperatures are supposed to stay low enough through the week to call for more snow (or snow mixed with rain) right up to and through Christmas Day. Bah. Humbug.

At least it's a weekend, so my demands at work relating to this weather have been reduced. There are a lot of people traveling on public transit today, though, because it's the last shopping weekend before the gifts fly on Thursday. I've been hoping and planning to host a Christmas dinner with my parents (86 and 91 y.o.) and my son Alex. The kid may be the only person to show up.

So, thanks, it's all very pretty but it's also cold and Portland doesn't cope with snow very well. I know there are people out there laughing at us, but they live in regions where snow is a normal part of winter and they're equipped to deal with it. I think the City of Portland has all of three snowplows. 50 miles south of here, from Salem on down, they've got rain and grass. Not a bit of snow. Humph.
Posted by jefffrane at 4:10 PM No comments: