Another day at the dog park, with lots of canine buddies to play with. Not blistering heat, but still warm enough to bring out the crowds . . . and no rain. A good day to howl.
Posted by jefffrane at 2:24 PM No comments:

I just found out today at work about some monumental news! Well, maybe not monumental, but thanks to TiVo and the Internet, I've already programmed my DVR to record the Best In Show episode of Westminster Dog Show, since I'm going to be at the dojo. I'll be rooting for the beagle.

Update: Well, so much for time zones. I may even get around to watching the recording of Westminster (I've been watching the Working dogs, lots of sweet faced retrievers), but all the suspense is gone. But, hell, after all that media build up what judge could turn down Uno? "Yeah, blah blah, the beagle is really cute, but the East Siberian Whoomzla is breed-perfect. Gurk! Ack!" As the lynch mob descends on the judges, the cameras pull back to a chaos of dog handlers in truly ghastly dresses beating each other with chew bars . . .

Whew. Fortunately, the BEAGLE WON!
Posted by jefffrane at 1:16 PM No comments: 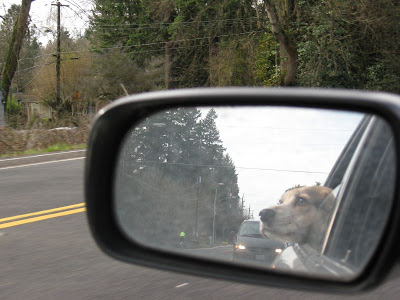 Eh. You try shooting a photo with one hand, out an open window in a moving car (while driving it) to get an image in the rearview mirror. This is Ralphie on his way to the dog park again, on what turned out to be a warmish, sunnyish day, a great break from the recent weather. A zillion dogs were there, ranging from miniature kick dogs to a year-old Great Dane the size of a Clydesdale. Lots of Labs, lots of husky-looking dogs, a couple of Bassetts (yay!), a pair of Labradoodles that looked like wolfhounds, pugs and Shepherds. Running, humping, barking and howling (that'd be Ralphie). A nice change from the previous Saturday with all the slush and rain. Much better.
Posted by jefffrane at 11:01 AM No comments: