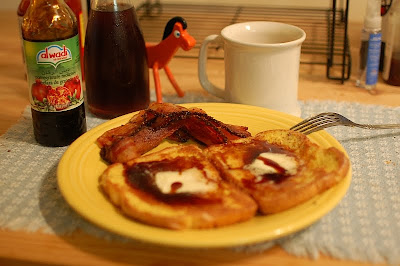 Working backward: I was craving a Picon Punch and realized that some time back I had thrown out a critical ingredient: grenadine. Not the hideous red glop from Rose's, but real grenadine homemade from pomegranate juice. Digging around for recipes, I discovered that Jeffrey Morgenthaler had posted a recipe that looked considerably simpler and better than what I had used previously. That version began by reducing pomegranate juice by half and then adding sugar. The grenadine tasted OK, certainly much better than the fake stuff, but it was much too thick, especially since I was refrigerating it. Grenadine from that bottle slid directly to the bottom of the glass, looking like an unappealing lava lamp.

Morgenthaler's recipe simply requires dissolving the sugar in the juice, exactly like making simple syrup (or hummingbird nectar, for that matter) but then gives the grenadine an extra punch and richness with the addition of orange flower water and pomegranate molasses. Pome-what? Pomegranate molasses turned out to be easier to find than expected. In fact, Barbur World Foods not only had pomegranate molasses, they had multiple brands to choose from. Obviously, I've been missing something in the world food line or I would have known this. The grenadine was just as advertised: simple, colorful and absolutely delicious. (Shortcut hint: I skipped the "squeeze a pomegranate" and went for the pure juice.)

When I asked Morgenthaler what to do with the 12 ounces remaining in my bottle of molasses, he suggested I just save it for the next batch, but after tasting the stuff I decided he may have missed the boat on this one. This morning's breakfast included bacon, French Toast and pomegranate molasses rather than syrup. Jackpot! Further exclamations of joy and sensation! Not only is the pomegranate flavor a delicious change but the molasses has a delightful tartness to set off the sweetness of the fruit.

Maybe I should have washed breakfast down with a Jack Rose or a Picon Punch, but coffee seemed the wiser choice. Pokey, incidentally, is guarding a bottle of the grenadine.

UPDATE: Doing a little more digging, I found an interesting blog post about pomegranate molasses, with recipes. The barbecue sauce is definitely on my list.
Posted by jefffrane at 11:05 AM 2 comments: