My one true love returns 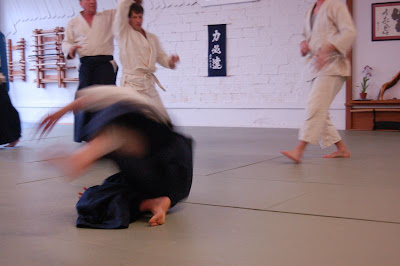 Well, actually, I returned to my one true love: Aikido. In 1980, I was struggling to lose a spare tire I'd developed after I quit smoking the previous fall. Swimming at the Berkeley YMCA was getting to be a huge bore when my friend Lizzy, who had taken some time out from aikido herself, convinced me to join her at what was then called Aikido of Berkeley (later, Berkeley Aikikai). What began with two weeks of rolling back and forth on the side of the mat turned into a full-blown obsession. A normal week found me at the dojo 5-6 days, often for two or more classes. Within a few years, we'd moved out of a converted garage into the relatively huge space on San Pablo Avenue where the dojo still resides. Hombu Dojo, world headquarters for Aikido, sent K Chiba to California to supervise teaching in the United States Aikido Federation Western Region and he made monthly visits to Berkeley. Aikido suddenly looked a lot different, and the intensity of training turned up more than a few notches.

In 1984, my teacher, Steve Sasaki, died of a massive heart attack. Within a few months, I'd also lost my job and the Bay Area was losing its appeal for me. I moved back up to Portland, and for the next few years this effectively meant giving up Aikido. In the late 80s, I dabbled briefly (with great frustration) in the Oregon Ki Society, where the approach to Aikido was not only vastly different from what I'd studied before, but where I was constantly told that everything I'd learned was wrong.

Then, in 1989, I was rescued by the appearance of Aki Fleshler, who had moved to Portland expressly to open a dojo under the instruction of the very same K Chiba. Oddly enough, he arrived in the middle of a flurry of Aikido teachers; consideration was given to building one big dojo, but teaching approaches were so different among the instructors that three dojos were started in the same period, and all three are still in existence. Fleshler Sensei, with the help of a small core of students, built Multnomah Aikikai. Our first class was held in January 1991, in a downtown building where we could watch a huge antiwar rally opposed to what became the first Gulf War.

Nearly a decade later, a series of injuries and a chaotic life pulled me away from the dojo for several years. Eventually, I convinced myself that I was too old and too broken to train again, but my dreams continued to be haunted by images from training. In the middle of the night, fighting insomnia, I found the most effective means of relaxing into sleep came from imagining myself on the mat, moving with the grace and certainty I'd once known. Last October, a casual e-mail comment from someone I've never met, a young Argentinian studying Aikido in Mexico, woke me up. I contacted the dojo, had a great talk with Fleshler Sensei and Van Amburgh Sensei (acting chief instructor) about my challenges and my desire to return to Aikido. I was welcomed back with love. It's like coming home.

What has amazed me, as I struggle with being much older and much stiffer and in terrible condition, is how much information my body retained even though I wasn't actively training. All those hours and hours, all those years of training, really did sink deep into my muscles and into my subconscious.
Posted by jefffrane at 10:09 AM No comments: 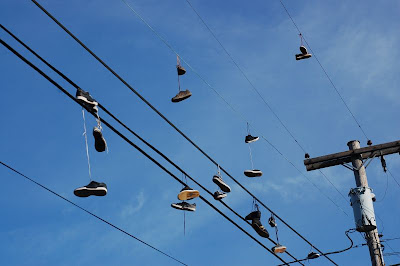 I don't get it. I don't get why people throw shoes up in the air so they hang from phone lines or power lines or whatever those things are up there. I see a lot of them these days, and it seems like I'm seeing them a lot more than I used to. Originally, I thought people were doing it to irritate someone else who owned the shoes, but I'm pretty sure that's not right. And lately, I've seen shoes that didn't even have laces to snare--cowboy boots, high heel pumps--people seem to be going to more trouble to get those shoes up in the sky.

And then there is this nest of shoes on Glisan St. I couldn't even get them all in the shot! Is this some kind of weird yuppie gang initiation? Or what if my initial idea was correct and all these shoes belonged to the same guy? I bet he's really pissed off now.

And what's up with the blue sky, anyway? Portland in January? Who's going to believe that one?
Posted by jefffrane at 7:51 PM 1 comment: