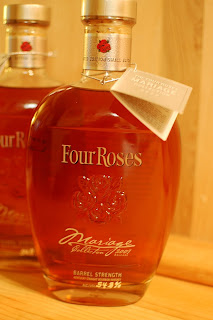 I have been a fan of Four Roses for about a decade, although it has long been a geographically-challenged affection. Up until a short time ago, Four Roses distributed their bourbons in Kentucky and nowhere else in the US; the primary market, in fact, was Japan. Even when I learned that they were reentering the US market, I figured it would be years before any found its way to Oregon. I was ecstatic when the Yellow Label, the Small Batch and the Single Barrel appeared in OLCC stores within the last year.

Four Roses has a unique approach to bourbon production. They maintain five different yeast strains (used to create the "beer" that will then be distilled into whiskey) and two different mashbills, with varying amounts of rye grain.To crib from their website:

All 10 of these recipes are gently aged undisturbed in new white oak barrels in our one-of-a-kind single story rack warehouses. All 10 recipes are expertly married together to create Four Roses Yellow. Four are married for Four Roses Small Batch Bourbon. Only one is hand selected for Four Roses Single Barrel Bourbon. To the thrill of Bourbon connoisseurs and Bourbon collectors, from time to time, our Master Distiller will select an exceptional single barrel, or marry a few exquisite recipes, to create one of our highly acclaimed limited release Four Roses Bourbons.

I had no expectation of ever seeing the Mariage in Oregon, but a helpful bartender steered me to a liquor store with a few bottles in the back room. The 2009 Mariage combines 10 year old and 19 year old OBSK with 10 year old OESO whiskies. (If you want to know what the codes mean, check here.)

When it comes to reviewing beverages, I'm completely useless. My friend Ryan can bang out 200 words on a single wine in minutes, complete with (to me) obscure references to fruits and vegetables, and solid suggestions on how to pair the wine with food. In whiskey reviews, I constantly run across references to leather, pipe smoke, or granite. Or, as D G Compton titled a short story collection: Hot Wireless Sets, Aspirin Tablets, the Sandpaper Slides of Used Matchboxes, and Something that Might have been Castor Oil. So I will again crib from the Four Roses site, because it's as close as we're going to get to appropriate language:

See! Pipe tobacco! What did I tell you?

The word I've always used to describe Four Roses bourbon is "soft," although I'm hard-pressed to explain why. The reference to the finish above, "smooth" pretty much defines Four Roses bourbons, all the way from the lowly Yellow Label on up. Any one of these bottlings might offer the perfect introduction to bourbon for people who "don't like whiskey", but I'm in no way implying that they are training-wheels bourbons. Mariage 2009 is warming, rich, and complex.If you can find a bottle, buy it. 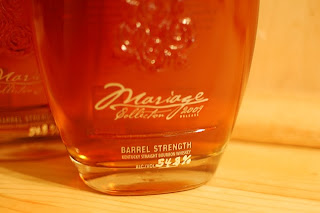