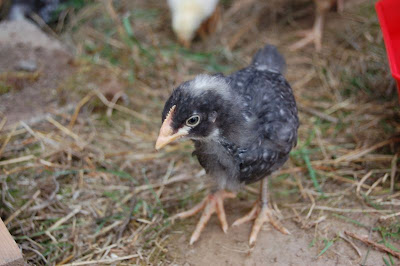 The chicks are a bit over three weeks old now, and completely transformed. When I first saw them they looked like Easter treats; now they're clearly chickens and the breeds are quite distinct from one another. They also have REALLY BIG FEET. I got to Bob's about 30 minutes after they started their first excursion outdoors and they were really uncertain about the whole idea. They huddled together near the wall at first, peeping like mad, but eventually they began to discover all sorts of things to peck at (mostly looked like dirt to me) and we spotted one snatching a big (maybe too big) bug that landed too close for safety. They have an enormous run to play in, but I imagine it will be a few days before they venture more than a few feet from the coop. More pictures of the chicks here.
Posted by jefffrane at 5:02 PM 2 comments: 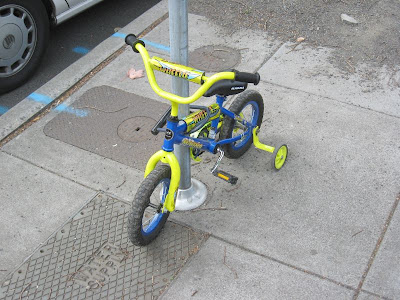 I know that Portland has become a serious bicycle city, but I think this commuter is starting a little early. The bike lock is half the size of the bike and it still has training wheels! Oddly enough, it wasn't parked in front of a day care center, although it was right by a MAX station. Maybe he bikes to the station and then rides the train to his job. I dunno.
Posted by jefffrane at 8:24 PM No comments: 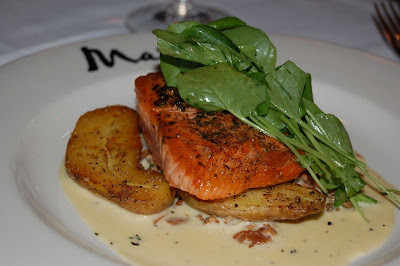 This was the weekend to move my son, Alex, into his Eugene apartment just in time for the Fall term at U of O. Which meant it was also another opportunity to recreate with Ryan and Jenaya! First up was a trip to the bar at El Vaquero, where the art and science of cocktails is in the hands of Jeffrey Morganthaler. We sampled a number of his creations, including a marmalade sour, Pisco sour, Richmond Gimlet, 43 Manhattan and a tomato daquiri. Everything was new and wonderful, with his own components (including the house tonic water) adding distinctive character to everything . . . but my heart belongs to the marmalade sour.

Alex passed on the cocktail hour, which was a big mistake, but joined us for a wonderful dinner downstairs at Marché, where Ryan happens to be the wine buyer. Lots of delicious appetizers, three different wines (I can't keep track; ask Ryan) and superb entreés including the salmon dish pictured here, a couple orders of duck, and Jenaya's paella. Oh, and it looks like we had dessert as well, judging from the photos here.
Posted by jefffrane at 2:08 PM No comments: