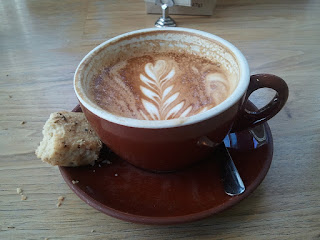 When my friend Ryan and I went to San Francisco the last week of April, we did not limit our drinking solely to wine, cocktails, wine and beer. On occasion, we started the day with coffee, thanks to the good folks at Blue Bottle Coffee (follow that link because it's a very interesting company). As good as many of the Portland and Eugene roasters are, I would instantly shift my loyalty to Blue Bottle should they ever open a roastery here, even though the World's Cutest Barrista works elsewhere.

That's the second-best latte ever, by the way, along with the remains of a Parmesan-fennel-sea salt shortbread cookie. The remains lasted only seconds after the photo.

First stop was at the Mint Plaza cafe, home to the world's first five-light siphon bar.(which is apparently a big deal, besides looking extremely cool). UPDATE: And then I realized that the five-light is off to the far right in this photo. I still have no idea what the Frankenstein-looking thing in the clear box is supposed to be. 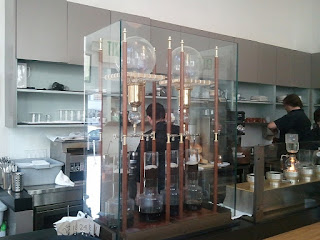 The Japanese have apparently gotten very serious about their coffee (Japanese always seem to get very serious about anything interesting), and their approaches to brewing coffee and the equipment designed for their techniques are finding their way to the US.


One adopter — and importer — of Japanese gear was James Freeman of Blue Bottle Coffee in Oakland, San Francisco and now Brooklyn. Freeman and his wife, the pastry chef Caitlin Williams Freeman, recounted a visit to Chatei Hatou, a Tokyo coffee shop where brewing coffee isn’t exactly a ceremony but is ceremonious. They said beans were weighed, ground, emptied into a filter and preinfused with a little bit of water that let the coffee bloom and release carbon dioxide. Cups and saucers were warmed, a slice of was set in the fridge to firm up. Only then was the coffee brewed, slowly.

“They’re going for a mastery of technique, then a mastery over all the important details of service,” Freeman said. “It adds up to an incredibly elusive experience. It’s hard to manufacture splendidness. It seems as though they have something very difficult figured out.”

And that giant siphon? There's a really beautiful slideshow about it at the NY Times, along with a YouTube video of the thing in operation:

While I was sucking down my latte, Ryan waited patiently for 10 minutes while his siphon coffee was prepared. 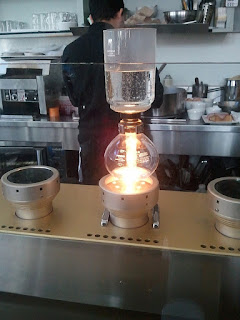 Showy, huh? And then the pot comes to the table. 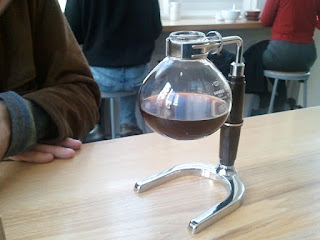 I couldn't for the life of me figure out how the siphon worked, but YouTube came through again.


Was the coffee better? You'll have to ask Ryan, who seemed pleased (which might have been because he finally got his coffee). I stuck to the latte.

The next day, we visited the Ferry Building for the second time, and I had the Greatest Latte Ever at the "secret" coffee bar with the shockingly short line. It didn't take 10 minutes to brew, either.
Posted by jefffrane at 11:50 AM No comments: