Some time in the spring my son, Alex, asked me if I wanted to travel with him to Tales of the Cocktail, a bartenders' convention. In New Orleans. In late July. I scoffed.

Weeks later I gave it more serious thought. After all, how many times in my life would I have the opportunity to go on a real adventure with one of my kids? Here was the opportunity to share our mutual enjoyment of cocktails and food in a city and a culture neither of us had ever experienced. I wasn't particularly interested in attending programs at Tales, but I figured I could do a little exploration on my own while Alex and two of his friends soaked up knowledge, booze and networking connections. I was only worried that it would be so godawful hot and muggy that I'd never go anywhere.As it turned out, the friends dropped out and neither Alex or I attended Tales. We did, however, have a great time and my preconceptions and view of New Orleans were turned upside down. 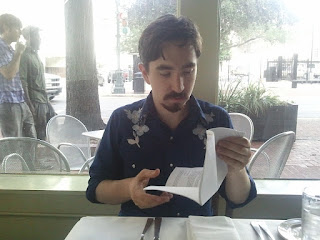 Although I was braced for the sort of horrid humidity and heat I faced in DC last year, when we landed at mid-afternoon it was warm and almost cozy outdoors. Our cabbie seemed eager to get rid of us, one way or the other, and rocketed along well over the speed limit. The hotel was a great score, thanks to Hotwire, very quiet and located a short walk from the French Quarter. And, as it turned out, our first destination, Herbsaint, was only a few blocks in the other direction on St. Charles. The highpoint at this little bistro would have been the frogs' legs but the day's amphibians were too wily for Herbsaint. I did, however, get my first Louisiana gumbo and it was good. It also reassured me that I was on the right track at home. 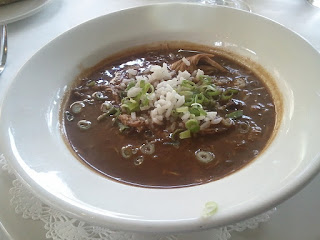 Next stop, and one of our primary destinations was Cure, a fairly new and serious cocktail bar on Freret. Just getting there was entertaining enough; our cabbie was full of information and advice delivered from the filthiest mouth I've ever heard. Driving everywhere, over some seriously torn up roads, he insisted we tour the Garden Distrct, which is filled with the most beautiful and exotic mansions I've ever seen. (Sorry, no pictures. Look it up.) 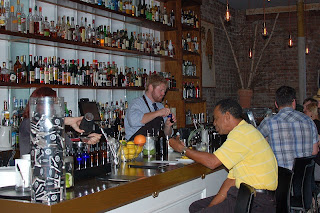 Cure was everything we'd hoped for and more and immediately moved to my short list of best American bars. Fantastic service for food and drinks, an enormous selection of spirits and cocktail ingredients, homemade bitters and terrific original cocktails. I was ready to stay the week. 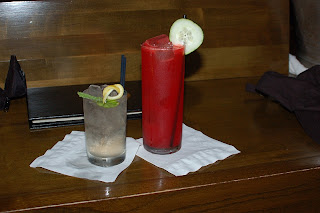 First up for me was the Gun Shop Fizz on the right, and Alex's Disappearing Ink (Dolin Blanc, Sherry, Strawberry Bitters, Rosewater, Lemon Peel, Mint) on the left. Cocktails are generally made with one or two dashes of bitters, but the fizz uses two ounces of Peychaud's. I expected a puckering challenge to my mouth, but the Gun Shop is bright and refreshing. More wonderful drinks followed, including Rhiannon Enlil's delicious Bees for Pele. (Rhum Agricole, Yellow Chartreuse, Lemon, Honey, Spice Bitters, Angostura Bitters) and a Sazerac made with Thomas H. Handy rye.

We had chosen to sit on the short side of the bar, opposite the kitchen rather than the bottle display. This made it very handy when the cooks reached over to deposit our small plates, including the fresh crab and watermelon salad. We were later given a dish of white chocolate-dipped blackberries with crumbled bleu cheese and walnuts. 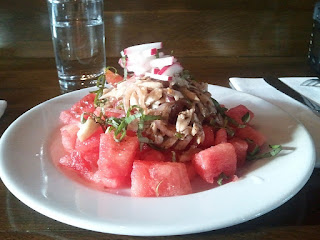 Later, our server told Alex and I we should follow Rhiannon and it didn't appear that we were being ejected. Instead, we were taken to a pair of tall glass-fronted cabinets near the door which was storage of their most special beverages. "Do you see anything you're interested in?" Well, yeah, hell yeah, but it was too overwhelming to focus. Rhiannon ended up choosing a bottle of Byrrh, a rich and delicious aperitif, and then offered to make us each our drink of choice using the Byrrh. Alex was served a variation on the Negroni, and I on the Manhattan. And I've run out of superlatives. 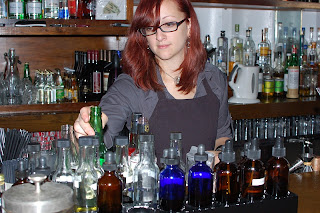 Rhiannon above, Alex's Negroni below. 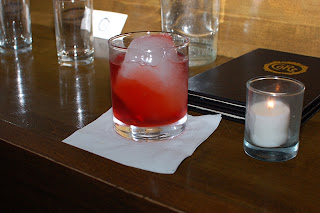 Off we went to the hotel and off I went to deep sleep. As it turned out, Alex was restless and went for a walk, thereby discovering that the French Quarter was only a few blocks away and that drunken college boys fling strings of beads even when it's not Mardi Gras.

More to come.
Posted by jefffrane at 8:04 AM