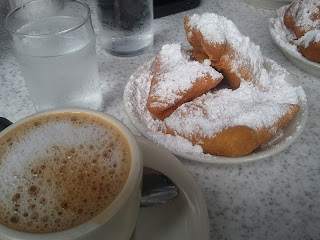 Living in Oregon for years has gulled me into thinking I know something about rain. After all, everyone knows it rains constantly here, day after day. In New Orleans, apparently, they've decided it's more efficient to pack two weeks worth of rain into two hours. Step out in it and you will be soaked to the skin in minutes and scampering from balcony to awning just doesn't cut it. (Note: next time bring an umbrella.)

Since walking around town was a really poor option, we decided to travel north to Abita Springs and visit their brewpub. First stop, though, was the justifiably famous Cafe du Monde in the French Market, where it has resided since 1862. Open 24/7 except for Christmas and days when hurricanes "pass too close to New Orleans." Most of the seating is outdoors, under a roof, and most of what is served is a cup of café au lait (with chicory) and three beignets buried under a cloud of powdered sugar. It's all just as delicious as it looks.

As the rain started in earnest, we drove for about 30 minutes to cross the Lake Pontchartrain Causeway, the longest continuous bridge over water in the world. Along the way, Alex discovered WWOZ on the radio, a listener-sponsored station playing an amazing blend of New Orleans music and local culture--and it's available streaming on the Internet! All of which made for great entertainment while driving over an endless bridge through pouring rain. 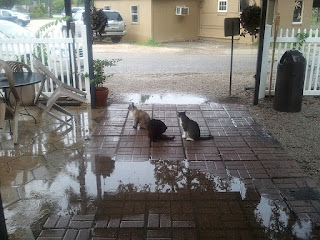 And more pouring rain. All I can say about Abita Springs, other than the rain, is that they have a very nice brewpub and a lot of very pretty houses. And cats. They have at least four (one ran off) trying to find a dry spot to sit outside the pub. None of them looked happy and particularly not about being disturbed.

As the day dried out, we headed back to New Orleans and our date with piggies. 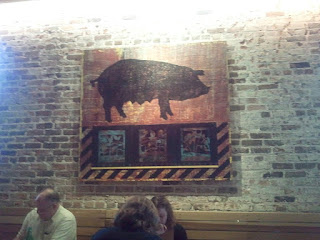 Alex had gotten us early dinner reservations at Cochon, a restaurant specializing in, uh, pork. (And I note that the owner/chef has been awarded the James Beard Award for Best Chef South, 2011.) And thanks to Alex, we received a warm greeting from the lovely Naomi aka Elaine (ask Alex), one of his former co-workers. Most of the menu items were "small plates", which can be a relative term. Oysters the size of my hand. Below that, pork cheeks and something yummy. An amuse-bouche with they called head cheese, which has no resemblance to any thing I've ever seen with that name and was delicious (as was the pickled okra). And finally, the main dish, braised pork with cracklings and peaches. I probably could have had apple fritters with southern pecan sherbet if there I had any room. 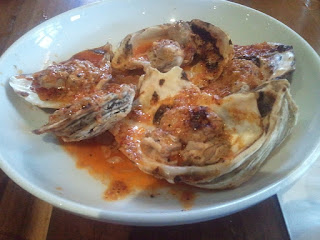 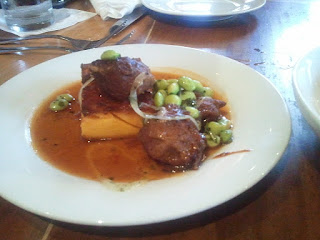 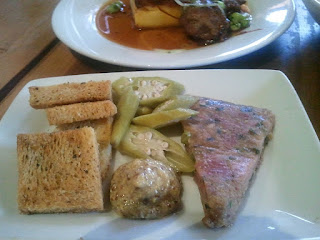 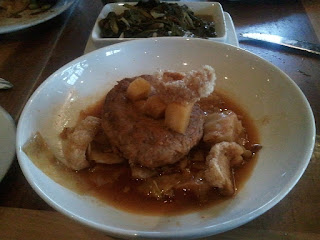 The rest of Friday involves drink.

After porking out, we found another bar on Alex's list, which turned out to be a not very exciting hotel bar where I had an indifferent Sazerac (I think). We got excellent advice from the bartender, however, including a warning that we really did not want to walk to the next bar on the list, down a very sketchy street. Instead, he suggested Arnaud's French 75 bar in the French Quarter next to Arnaud's Creole Restaurant, which has been in the location since 1918--a beautiful and elegant bar with a superb and attentive staff. In the spirit of Tales, the bartender had created some new specialties. I think (but can't guarantee) that the new drinks included a specific Amer. I got stuck on their version of a Martinez and never wavered. 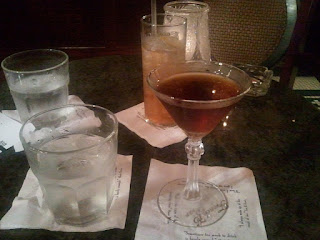 Arnaud's was a perfect place to spend the evening, with a lively crowd that included spill-overs from the restaurant (a wedding rehearsal dinner with exceptionally lovely Southern Belles), a friend from Portland, and more people from Portland! And to top it off, it was only a few blocks (stumbling distance) from our hotel.

A little bit more to come, although mostly much quieter, and perhaps some deep thoughts.

Posted by jefffrane at 8:01 AM

I had a very nice shaved hog's head at Cochon last week, with pickled baby beets. The waiter kept calling it "face".