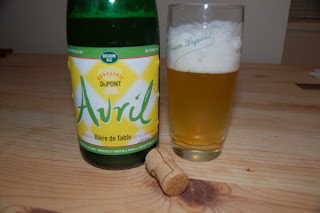 There is a brewery somewhat southwest of Brussels in Belgium that produces several of the beers on the very top of my list of favorites: Brasserie Dupont. It may be subject to argument, but in my opinion their beers define the modern saison. Originally brewed as a refreshment for Wallonian farmworkers, and thus undoubtedly low in alcohol, most of Dupont's beers range from about 6% abv to over 9%.

The flagship beer is Saison Dupont, a coppery effervescent beer that beautifully combines the fruitiness of a Belgian yeast strain with plenty of hop character and a dry, refreshing finish. Another personal favorite is Moinette Blonde, which is even more hoppy than the standard but again, not with a great deal of the bitterness we associate with American "hoppy" beers. And then there is the seasonal Bon Voeux, richer and stronger (9.5% abv) than the Saison, and the beer I most often choose as my "favorite beer."

Most of the Belgian beers that appeal to beer geeks are bottled at a fairly high alcohol content, corked and conditioned in the bottle, which allows them to be cellared if desired. "Singles" or "bieres de table" are difficult to find in a commercial bottling, although it seems the monastic breweries produce them for consumption in house, "at table." Dupont's Avril (which appears to be the same as Biolegere in Belgium) falls within this range, at 3.5% abv. In the UK, ales produced at a similar alcohol content are quite common, and considered "session beers" because it's possible to spend an entire evening at the pub drinking them with less effect than beers in the US (or particularly, Belgian ales). In the US, of course, "3.2" beers have a well-deserved reputation for being watered-down and flavorless.

Avril is a remarkably flavorful beer, recognizably related to Saison Dupont and Moinette, and obviously much less alcoholic. It's also obviously different, lighter and initially bordering on "thin". It seemed to me that much more of the character of the yeast (especially a bubblegum ester) came through in Avril than in the stronger beers. Like the other Dupont ales, it's effervescent and bottled at a higher level of CO2 than American beers, which enhances the aromatic character of the beer.

Customers used to paying for punch will probably be disappointed. I paid about $9 for a 750ml bottle here in Oregon and only slightly more for a bottle of Moinette Brune from the same brewery -- at 8.5% abv. But I was also far more clearheaded after finishing the Avril than I will be after finishing the Brune. Which may be later today, come to think of it.
Posted by jefffrane at 7:47 PM

I haven't seen this around here. I need to find it, as Dupont are also one of my absolute favorite breweries (and Saison Dupont is one of my frequent "favorite beer" citations). This definitely sounds intriguing.

Hi Jeff, Thanks for your comments on Saison Dupont and Avril. Is it ok to link your blog to our website www.belgianexperts.com? We are working on the site and the new improved version should go up at the end of May. Hope all is well in beatiful Portland. Best, Wendy

Herself and I were in Belgium recently, and after visiting an open-air museum in Aubechies, I pointed the buggy down the road to Tourpes, just a few minutes away. We called in at La Forge, a *very* local cafe with Dupont's Saison on draught. The day's special was blanquette de veau with a side salad and frites. I don't really have to tell you how well that went with fresh glasses of Dupont, do I? Anyway, not at all difficult to reach from Brussels, via the lightly-travelled E429 motorway.