When love comes to town 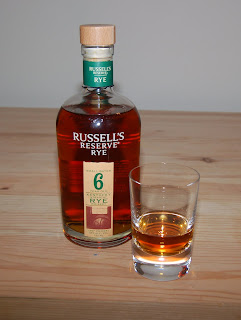 I have been enviously reading reviews and comments about Russell's Reserve Rye for awhile now, hearing only good things and wondering when the OLCC would get off their duffs and order some for the local liquor stores.

According to my friend and goofball writer, Lew Bryson, Jimmy Russell celebrated his 54th anniversary with Wild Turkey last fall. He has been the master distiller there for ages and his son Eddie was promoted to associate distiller a few years ago. Together they created Russell's Reserve 10 year old bourbon, originally produced at Jimmy's signature 101 proof and subsequently reduced to 90 proof. All Wild Turkey whiskies are superb, and the Russell's Reserve is no exception (although I dearly miss the 101 version).

Wild Turkey has produced a spectacular rye for years, during a span of time when it seemed that American drinkers had lost their taste for rye whiskey, and any version could be tough to find. Also bottled at 101 proof, WT Rye is a solid kick in the pants, full of honey and vanilla. It is serious whiskey.

Russell's Reserve Rye, like the bourbon, is bottled at 90 proof after aging six years. It is a remarkably soft and smooth rye whiskey, with the characteristic Wild Turkey honey but far more gentle than the bigger bottling. Of all the ryes I've tasted, it may the most accessible, with no alcoholic burn, none of the spice and hard edge that other ryes might have. It's clearly designed for drinking straight -- no help from water or ice needed, and it is probably not a terrific choice for a cocktail because of its subtlety. "Sipping" whiskey has become a cliché, often undeserved, but I can think of no better way to describe Russell's.

I'm guessing that this whiskey comes from specially-selected barrels of their standard rye, aged a bit longer and bottled at a lower proof so that the flavors need not battle with alcohol. What emerges is a terrific whiskey, and I'm very pleased it's finally made its way to Oregon. Odd, though, that the level in the bottle seems to have dropped considerably since I bought it. There must be a leak.
Posted by jefffrane at 5:29 PM

Nah, it's evaporation. Right through the cork. I have the same problem with my bottle.

Dang, Lew beat me to the punch with that particular response.