Pounding in the kitchen 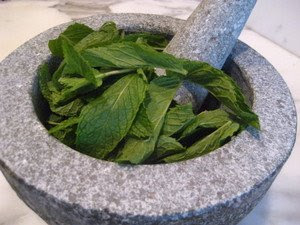 File this one in the "learn something new every day" drawer. For years, I've had a mortar and pestle in the kitchen, first a little one and these days a nice big stone device I got for pennies at an Asia grocery. I have dutifully used it many times to mash and mix and I've always thought it was a heck of a lot of work for so little payback.

I have a cookbook by Mai Pham, who apparently has a Vietnamese restaurant in Sacramento. Pleasures of the Vietnamese Table has some great recipes in it, most of them based on her research among street vendors on annual trips to Vietnam. Tonight I stumbled on her description of the mortar and pestle as the "one thing" to buy for a Vietnamese kitchen. And I ran across this: "When using the pestle, pound it freely in an up-and-down motion. Many novices make the mistake of pressing (as opposed to pounding) the pestle into the mortar, which tends to make the job harder and longer." (emphasis added) So, a novice, huh?

Since I was just busily stirring some garlic, bird peppers and sugar in what would certainly prove a pointless exercise, I gave it a try. Amazing. I could easily have gone through the rest of my life ineptly using one of the oldest tools in human culture. Thank you, Mai Pham!
Posted by jefffrane at 4:26 PM

okay, this will change my life in the kitchen. Mine is a mocaljete which is the Mexican version of the mortar and pestle....and I am definitely a presser! But no more, a pounder now for sure....especially if I get to "pound freely"....there must be something around here that I can smash tonight...

It won't change my life but it's good to know an old fart like you has learned something. Mmm. Asian food.