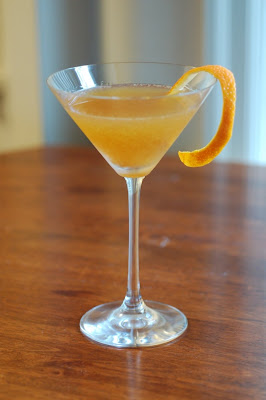 Beginning some point last fall, under the pernicious influence of my friend Ryan and Eugene's (Oregon's?) best bartender, Jeffrey Morgenthaler, I picked up the cocktail bug. I was particularly struck by Morgenthaler's enthusiasm for creative interpretations of classics, for innovation, and for an insistence on using only the best ingredients. The pursuit of that last component had even driven him to producing some of his own ingredients. What eventually became obvious was that Morgenthaler, while terrific, isn't unique: there is an entire movement of cocktail enthusiasts, both professional and amateur, on the same path. Unsurprisingly, they're linked together by the Internet, as a glance at Morgenthaler's blog roll will reveal.

Oregon, not so oddly, seems particularly active. The bartenders themselves have formed The Oregon Bartenders Guild, which recently launched an online forum open to professionals and amateurs. And, like the microbrewery movement of the 1980s, Oregon is also bubbling with craft distillers producing distinctive and characterful gin, vodka, whiskey and rum.

All of which is a long-winded introduction to Mixology Monday, a monthly event hosted by a round robin of bloggers, each time with a new "theme" for cocktail submissions. I've been following the event with some amazement, fully convinced I'd never actually participate. But Anna Australia's selection of fruit liqueurs happened to coincidence with some of my own tinkering, so here I am. The April Mixology Monday is here.

Part of my cocktail experimenting has involved getting outside my comfort zone. For some reason (probably due to a bad hangover, as these decisions always seem to derive from), I've been avoiding brandy for years. Much to my astonishment, I fell in love with the Sidecar, which has become (with the Manhattan) pretty much my go-to cocktail. When I ended up with two different bottles of Calvados (hmm, sounds like they were found on the stoop rather than purchased), I wondered if it was feasible to substitute apple brandy for grape brandy and still end up with a Sidecar. Turns out the answer is a resounding "maybe." The results can be good, but (as pointed out by someone in the OBG Forum) it's not a Sidecar. And, in my own opinion, lemon juice doesn't sit as well with Calvados as it does with brandy.

Along with one of those Calvados, I picked up a bottle of Mathilde Orange X.O., a really delightful (and inexpensive) French liqueur with a Cognac base. I tried several variations combining the X.O. with Calvados and ended up substituting freshly-squeezed Valencia orange juice for the lemon juice in the original recipe. Subsequent experiments involved a 50/50 blend of lemon and orange juice or cutting the X.O. in half with Pedro Ximenez. The lemon was all wrong, and my independent panel of tasters (my kids, but they're old enough to drink!) decided the Pedro Ximenez was murky and too "molasses". The final recipe was essentially identical to where I started out. Research after the fact turned up some very similar recipes, including Regan's recipe for a Calvados Cocktail in which he used the lemon juice I threw out.

I like simple, if only because it's easier to remember.
Posted by jefffrane at 10:32 AM