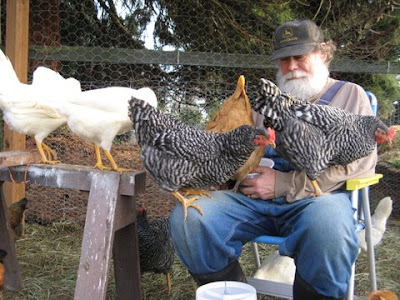 When we last saw the hens, they were in their velociraptor stage. Now they really look like chickens and they've even started laying a few eggs. This, however, is how my friend Bob likes to spend an evening, getting a lap dance from the chicks while they get their dinner. Bob's got his full farmer gear on, from rubber boots to John Deere cap and this is about as happy and content as Bob can get. The girls look pretty happy, too. They love their mom, Bob, and they love to eat. Those Barred Rocks are pretty chickens!
Posted by jefffrane at 5:46 PM 1 comment: 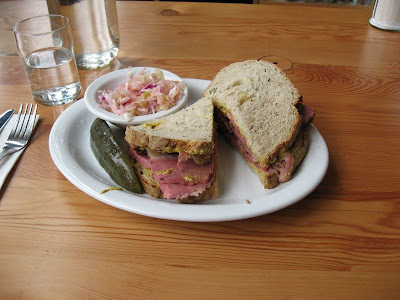 Portland food has changed. It wasn't that long ago that "Portland food" meant an extra pile of alfalfa sprouts on the sandwich or, for dinner, a nice piece of salmon (not that there's anything wrong with salmon). What it really did not mean was meat. Well, there was always the Ringside, where a local might enjoy a good steak or prime rib -- in the dark, where no one was likely to spot you, and if they did well, what were they doing in the Ringside? And there was always Sayler's, where people were challenged to eat a 72 oz. top sirloin dinner in one hour. If they could choke down 4.5 pounds of beef, plus all the trimmings (and that's a lot of trimmings), the meal was free. But even at Sayler's, it was acknowledged that this was a grotesque event, chronicled by a wall of photos: gluttons cramming down huge portions of dead cow . . . in Portland, meat was, well, unfortunate.

Maybe it's the influx of immigrants from the East Coast and the Midwest, but things have definitely changed. Chefs are packing them in with marvelous concoctions of the nasty bits, much of which is actually, well, pork. Suddenly, Portland people are willing to gather in public, even in broad daylight, and eat meat. It's weird.

All of which is to say I finally made it to Kenny and Zuke's, a fairly new and thoroughly astonishing (for Portland) deli. There have actually been a few places in town (notably Milo's City Cafe and The County Cork) corning their own beef and grilling incredible Reubens, but K&Z are the first to expand this to a full deli menu, most particularly and deliciously by producing their own pastrami. Real, fatty and smoky pastrami. Mmmmm. Unheard of in Portland since the old deli in the city courthouse went out of business 20 years ago, real pastrami is nothing at all like the "pastrami" sold in local groceries and butchers. To make it perfect, the deli even bakes their own rye bread, the first true Jewish rye to cross my lips in decades.

Kenny & Zuke's sits on one of Portland's hippest city blocks, sharing the sidewalk with Clyde Common (with a lunch crowd scoffing down some of the best burgers in town), the Ace Hotel (with a lobby lounged with hipsters and their Macbooks), and a Stumptown Coffee shop (more hipsters and more Macbooks). The deli was packed and it was fortunate for me that I was on my own and more than happy to eat at a counter. But even with the lox and the chopped liver and the kreplach, and everyone happily noshing and schmoozing, it doesn't look like any deli I've ever seen. It looks like Portland: huge windows and all the light available on a murky February afternoon.

And the pastrami? Well, the pastrami was every bit as good as advertised and after my long long pastrami famine, probably better than advertised. So was the rye bread, with its crunchy crust and soft salty interior. The sandwich? Well, maybe I'm just old, but I think that cutting pastrami in slabs is a mistake. To me, pastrami should be cut super thin and then piled into a grotesque heap on the bread. Like this. The thick slices make it a difficult sandwich to bite into and I made the mistake of asking for mustard, which was slathered on with a heavy hand. Great mustard, but it made the bread soggy and that much more difficult to handle. And my waiter had a difficult time with the drink order, but it was admittedly very noisy and he may just have mis-heard me.

Still, I'll be back (no mustard next time) because it was great meat. And very decent slaw and an exceptionally good pickle. What else can you ask for?
Posted by jefffrane at 3:13 PM 1 comment: 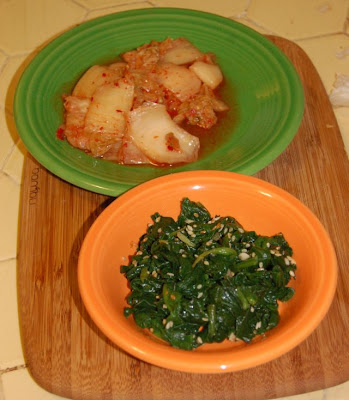 Recently, I was celebrating a co-worker's birthday. Since the birthday boy is Vietnamese, we had spring rolls and salad rolls to go with the cake. Mmmmm. Someone mentioned kimchee, which was met with many blank stares. I thought they were joking, but it turned out that a significant chunk of the dozen or so people in the room had never had kimchee or even heard of it. What the . . . ?

Kimchee is the staple food (along with rice) of Korea. It's cheap, it's nutritious and it can be served as a side dish or cooked into other dishes. Most of the kimchee we see in stores is pickled Napa cabbage, cured with salt, ginger and a significant amount of hot pepper, but it can be made from a variety of vegetables and. A friend of mine who had married a Korean woman and lived in Korea told me about a version called "little boy" because it was made from tiny radishes that looked like a baby's penis. I've not seen any of that for sale, but I've had other versions of kimchee, including one his wife whipped up in a few minutes from lettuce and a LOT of pepper.

Thinking about kimchee reminded me I hadn't had any for awhile and that made me think, hmmmm, what goes with kimchee? And so I'm getting ready to eat Dak Jim (garlic chicken), white rice, Shigumchi Namul (sesame spinach salad) and kimchee. I'm lucky.

That's the kimchee and spinach in the picture. Garlic chicken is a simple stew made with lots of garlic (d'oh), green onions, soy sauce and sesame oil and sprinkled with toasted sesame seeds.
Posted by jefffrane at 6:18 PM 1 comment:

Lemons and their preservation 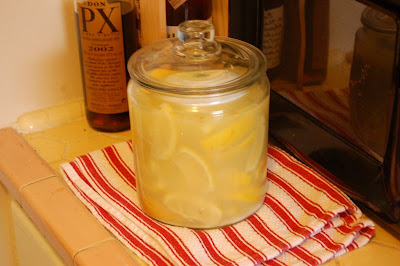 Thinking ahead, for a change. In about six weeks, I want to prepare a Moroccan lamb tagine. To do it right, I need preserved lemons, and they take time to pickle. This is my first attempt at preserved lemons, although I've run across the notion before and execution is apparently simplicity itself. We shall see, because there is a remarkable inconsistency about salt levels and length of time needed for pickling. And my source cookbook, Aidells and Kelly on meat, has already flunked on the question of volume. Eight lemons in a quart jar? Hmmmm. That seemed unlikely to me and has proven to be ridiculous. Either they have very small lemons or a very large quart.

At any rate, last night I washed, dried and sectioned the lemons, removing seeds and salting all the segments with 1 cup of Kosher salt. After taking a second trip to the store to buy a suitable jar (no metal lid!) I tossed the salted lemons and a lot of lemon juice in and have been sloshing it around. This morning I added an upturned plate to help keep the lemons under the surface, since they've been bobbing up no matter how much juice I added. After a week? or three weeks? at room temperature, the jar will be topped off with olive juice and refrigerated. By then, there should have been transformations to the lemons, although I'm still not entirely sure how that will look. Some of the recipes I've read include cinnamon, pepper and other seasonings and I may fiddle with those in the next few days.

If the lemons go through a visual transformation, I'll update with photos. It's a challenge to photograph because the camera likes the surface of the jar and it's very difficult to focus on the lemons rather than the glass.
Posted by jefffrane at 11:55 AM 5 comments: 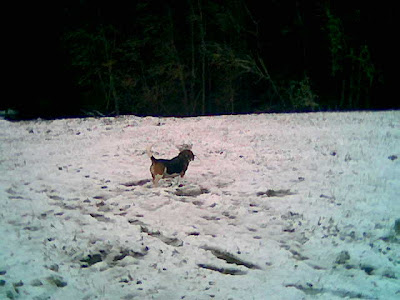 The weather here has been crap. Up in the hills, they got snow; up in the mountains, they got tons of snow; even south in the valley, they got lots of lovely snow. Here? We've gotten rain in abundance and yesterday we got slush. Charming. Ralphie and I wandered off to the Gabriel Park off-leash area in search of buddies and maybe snow and encountered two or three other dogs in an open field of slush and cold nasty rain. After my shoes and socks were thoroughly soaked, we wandered back toward the car on paths deep in running water, past creeks overflowing with rushing water. This little piece of field was the closest Ralphie got to playing in the snow.

On the positive side, Ralphie did get to exercise his big boy outside voice. A lot. One fellow told me he could hear him baying all the way back to the tennis courts. The tennis courts are by the upper blue point and the winter off-leash area is marked by the other blue point.


View Larger Map
Posted by jefffrane at 8:41 AM No comments: