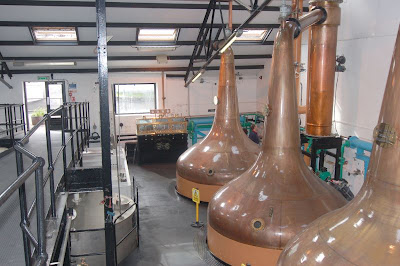 The still room at Bowmore Distillery, on Islay, the southernmost island in the Hebrides. Some of the world's finest malt whiskies pass through these copper vessels before spending years aging in wood. The Bowmore tour may be the most interesting on the island (there are seven other distilleries on Islay) due to the presence of the floor maltings, a tradition that most distilleries have long since abandoned.
Posted by jefffrane at 9:34 AM No comments: 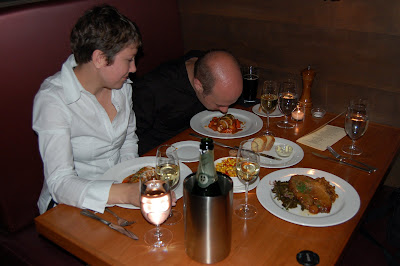 Jenaya and Ryan about to dig into the entrees. This was taken at Roux, an incredible restaurant here in Portland, on the first anniversary of Katrina. We've already been through cocktails and appetizers (including crawfish pie!!!) and there will be huge desserts after this course. This may have been the best dinner I've ever had and certainly the most fun I've ever had eating. More photos.
Posted by jefffrane at 1:47 PM No comments:

Three down, well into number four. I did take a break last evening to watch a little tv, but I'm not finding it at all difficult to "choke down" a continuous diet of Hogwarts. I think that's either a tribute to Rowling's writing . . . or to my admittedly low standards.
Posted by jefffrane at 12:01 PM 2 comments:

Although I count myself a fan, I am not a fanatic, so I have never re-read the adventures of the boy wizard. When volume 7 arrived in the mail, though, I decided it would be a great opportunity to do so. Yesterday, I polished off the Philosopher’s Stone (on the bus, at lunch and during a Mariners game) and started on volume 2. The project looked pretty simple at first blush, because the first two books are relatively slim. I have no idea why Rowling super-sized Harry starting with volume 3, but now I’m looking at the stack of fatties that awaits me and wondering if I can choke down that much Hogwarts at once.

I didn’t remember the books as particularly jokey, but Rowling definitely gets in her little British humo(u)r in the Philosopher’s Stone, and not just at the expense of the Dursleys. I have a vague memory of people complaining that the books got progressively darker, and I wonder if she had such a plan when she started scribbling.

I find it interesting that the movie characters, for the most part, have not intruded in my imagination while reading the books. Most of the actors are fine for their parts, but their voices do not replace the characters. The exceptions are Alan Rickman (one of my all-time favorite actors, since I first saw Truly, Madly, Deeply) and Robbie Coltrane. Snape and Hagrid speak from the pages in the voices of those two actors.

We shall see whether I can persevere, but no Deathly Hallows for me until I do. I may need to take a break and read a good modern crime novel somewhere in the middle. Or maybe a post-modern graphic novel.
Posted by jefffrane at 11:52 AM 1 comment:

The Religion, a "review"

My days of writing book reviews are long over, but not my desire to recommend books or to “discover” new authors—which in this case means discovering someone who has been writing fiction for a number of years and who I’ve only just stumbled upon. The Religion is a big fat, incredibly satisfying historical novel set during the Siege of Malta in 1565. It is apparently the first of three novels chronicling the life of Mattias Tannhauser, and the historical period is rich in possibilities.

Tannhauser has returned to the West after spending years as a Janissary in the service of Suleiman the Magnificent and has been dedicating himself to trade and sensuality, both of which conspire to place him inside the beleaguered fortress with “The Religion”, the Knights Hospitaler’s headquarters in Malta, as thousands and thousands of Turkish warriors descend on the island, determined to put an end to the fighting monks, who they view as terrorists.

Willocks has chosen a fascinating period in European history and done an incredible amount of research. This is still a period preceding the rise of nations in the West, with a great struggle between the Church and the wave of Protestantism, the Muslim East and the great array of languages and principalities. Tannhauser is a terrific vehicle for the story, as a man who has lived among the Ottomans and the “Franks”. Willocks reminds me very much of the late Dorothy Dunnett, except, well, far more violent, brutal and explicit, much like Bernard Cornwell’s Sharpe only, well, far more violent, brutal and explicit. Willocks surrounds Tannhauser will a host (literally) of other fascinating characters, all of whom felt to me as though they were human and rooted in their time, rather than 21st Century characters transplanted to the 16th.

I am intrigued to see where Willocks takes the trilogy. Unlike so many other “first” novels in a series, Willocks leaves no obvious trails to be dragged out into other stories, and The Religion stands alone very well. 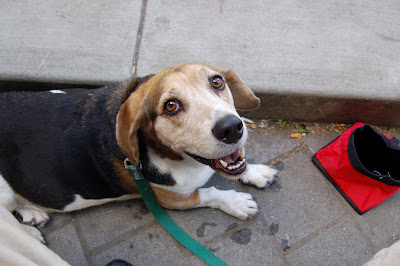 3.5 miles is a much longer walk when your legs are only four inches in length.

My best dog friend, Ralphie, is a bagel. Which is pretty much to say, he's got a basset hound body with a beagle head stuck on the front. He also has a fierce heart and would probably walk until his stumpy legs wore down to nubbins, well after my much-longer legs gave out. Ralphie and I no longer live in the same house, but he's always ready for a ride in the car and a nice long walk.

This photo was shot as we rested up after our walk on Portland's Esplanade on a beautiful weekend morning. We walked north from the Hawthorne Bridge to the Steel Bridge on the east side of the Willamette River, crossed over on the walking path of the bridge (as MAX trains and cars rumbled overhead) and then back south on the west side, amidst scores of runners and bicyclists.

Posted by jefffrane at 5:01 PM No comments: