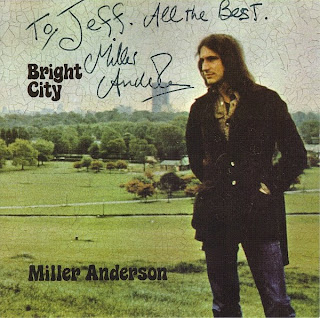 One of the great joys of my life has been discovering new music. In the late 60s and early 70s, this usually meant trusting the judgment of reviewers at Rolling Stone, having a friend with similar taste put on an LP, or tracking down musicians as they left one band and joined or formed another. After 40 years or so, I have no memory of how I found the Keef Hartley Band, unless I followed up with him after his stint with John Mayall's Bluesbreakers. All I know is I fell in love with the band largely because of the vocal and guitar contributions of Miller Anderson.

Eh, not the greatest video, but finding any good footage from that era is mostly just luck. As he was leaving the Keef Hartley Band, Anderson released his first solo album, Bright City, with a much more jazz and folk orientation than the blues rock the band had produced, except for one very bluesy track. The haunting title song would surface in my memory off and on for years, long after the LP had been stuck away with hundreds of others as I was seduced by the ease of CDs.

When I bought my first CD, I swore I wasn't falling into the trap of replacing albums I already had on LP--an oath that must have lasted a week. Instead, many of the CDs I bought were to replace old favorites that over time had been overwhelmed by the pops and skips of long use. Being able to clap on headphones and listen to something like Paul Butterfield's long East/West instrumental in pristine clarity was impossible to resist. Unfortunately, a lot of the music I'd acquired was simply not being reissued on CD.

Within the last decade or so, the recommendations from friends like Ryan and Charlie included music from "my" era, the late 60s and early 70s (before Ryan was even born) that I'd never heard, from a lot of musicians I'd never heard of. Much of the music came from overseas, primarily from the UK, music that hadn't penetrated our close-knit world of California.

Thanks to the Internet I discovered digital versions of much of it and eventually acquired the equipment needed to digitize my LPs--which is a lot of work. So much easier to track down files online or CDs issued by tiny record labels, many of them from Europe. I recently reacquired the Keef Hartley Band albums, and without much confidence did a search for Miller Anderson. It should probably have been no surprise that he's still working, still touring and still producing exceptionally fine music--with a website that included Bright City as a CD. Webmaster Ada responded to an email to tell me they still had a few copies and, if I wanted, she could have Anderson autograph one (see above). And so she did. I bought that and a copy of Bluesheart, a fine blues album from 2003. (Thanks to the Royal Mail and the USPS, the package took three days from Brighton, England to Portland!) The "exception" I mentioned on Bright City is a solid blues cut that appears to have become a signature for Miller Anderson. A version kicks off Bluesheart and I found a video of him performing the song in Moscow:

Before the CDs had arrived, I'd already picked up another recent album featuring Anderson, a Live from Glasgow recording by a group called The British Blues Quintet, five musicians who had been playing live and in studios, with a constantly shifting group of fellow musicians, since the 60s. The album "features" Maggie Bell, and a casual study made her sound very intriguing, with comparisons to Janis Joplin. In the late 60s, Bell had been the lead singer for Stone the Crows, yet another musical group I'd never listened to. I did have a faint memory that I'd heard of them, but only because of the bizarre death of lead guitarist Les Harvey, who had been electrocuted during a sound check. As far as I can tell, Stone the Crows had never made a dent in the American market and certainly hadn't surfaced on West Coast radio. Harvey's death finished the band, but not until they had produced some brilliant music--how had I missed them?


Listening to Stone the Crows brought me full circle--back to discovering "new" music from the late 60s, music I would have eaten alive back then which became something miraculous in 2010. And I'm pleased to report that Miller Anderson and Maggie Bell are still brilliant. (YouTube also has a three-part live Stone the Crows concert from Paris that runs over 20 minutes and makes the comparisons to Joplin a little more understandable.) 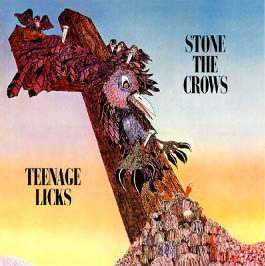 Posted by jefffrane at 4:27 PM No comments: