First you make a roux 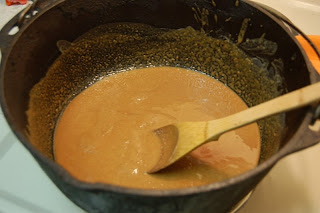 Theoretically, that's the first line in any Cajun recipe. This is on its way to becoming roux and then it will serve as the basis for a gumbo. Just oil, flour and heat. Oh, and a lot of stirring so the roux doesn't burn. For years I would baby the roux and it would take forever to darken properly, but I eventually learned to keep things pretty hot and rely on stirring to keep it safe. It's working. 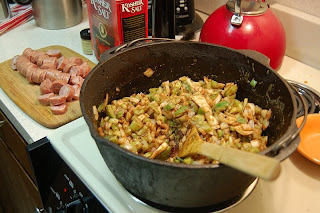 The next step is to add the holy trinity: peppers, onions and celery. And then some sausage (very difficult to get real andouille up here in Portland, so I have to settle for something inferior but not necessarily bad). 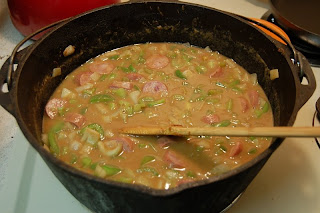 Cayenne, bay leaves, salt and chicken stock. Now it gets to simmer for a few hours. Then some chicken, some seasoning and more simmering. That's pretty much it.

Then it will be gumbo.
Posted by jefffrane at 12:47 PM No comments: 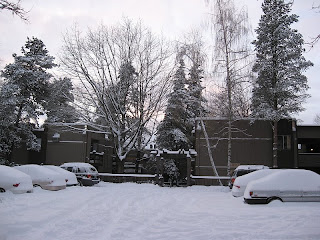 When I came out of the apartment this morning to slog to work I was shocked by how much snow had fallen through the night. This just does not look like Portland. At work we had to shut down a lot of bus routes and I think the customer response to that is not going to be pretty. A lot of people are going to have (or have had) a really difficult time getting home from work. I just hope a lot more of them decided this morning it wasn't worth the effort to go in in the first place.

That car on the right, where you can see that it's silver? That's mine. It's not going anywhere any time soon.

Please melt!
Posted by jefffrane at 5:09 PM No comments: